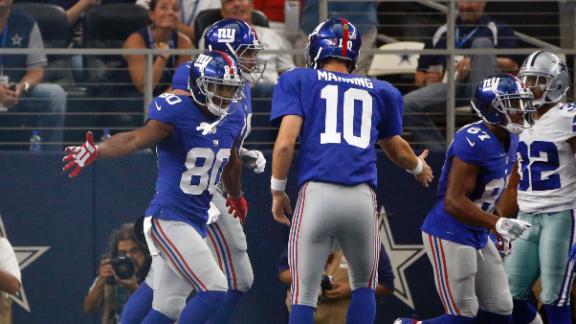 ESPN
By Jordan Raanan
ARLINGTON, Texas -- If New York Giantsreceiver Victor Cruz had drawn up a storybook return, it might've looked something like what unfolded in Sunday's opener against the Dallas Cowboys.

Cruz scored the winning touchdown for the Giants in a 20-19 victory over their NFC East rivals at AT&T Stadium. He renewed the tradition of dancing the salsa in the end zone after a score, and catching big passes from quarterback Eli Manning when the Giants needed them most.

After 700 days, Cruz finally returned to a regular-season game after knee and calf injuries kept him out of the Giants' previous 26 games. For it to end the way it did, it was almost surreal. Even Cruz couldn't believe it.

"No, to be honest with you," he said. "But I'm excited to have the opportunity, just excited the way my life is unfolding here. I don't even know what kind of ending it's going to have."

The Giants (1-0) won, Cruz scored in his return and, for one night at least, all was right in the Big Blue universe.

Cruz finished with four catches for 34 yards and a touchdown in his return. Finally, the Giants got a real taste of what they may receive on the field from the former Pro Bowl receiver.

"I was excited for him. Not just for the touchdown, but just being out there today [and] catching some passes and being in the mix, doing his deal," Manning said. "So that's good for us that he can come back and make plays. He has so much experience at finding windows, finding lanes and getting back to where he's comfortable catching balls and making guys miss. That's big for this team. I'm excited for him from the standpoint that it's been a long time for him, almost 700 days since his last game. That's pretty special for him to get the game-winning touchdown in this game. ... He's looking good, looking like his old self, and that's big for us."

It's also important for Cruz. Even though he claims to have never doubted the return would happen, he knows the opportunity is special. There aren't many skill-position players who have missed almost two full seasons (especially after tearing their patellar tendon) and returned to any significant degree of success.

Cruz, 29, not only made it back, but he managed to score a touchdown the Giants desperately needed to give them the lead with 6:13 remaining in the contest.

The Giants are ecstatic to have him back, and it meant something to see one of their longest-tenured players with that trademark smile on his face.

"So awesome. He had a rough run the past two years. To see him come through like that at the end, the entire game, it's a great feeling," said veteran long-snapper Zak DeOssie, a close friend of Cruz's. "I'd be happy for anyone, but for him to make that big-time play, it's just awesome."

Cruz told DeOssie the salsa dance he did in the end zone while wide receiver Odell Beckham Jr. pretended to snap a picture was "one of the best he'll ever do." Cruz told him he put extra pizzazz into it.

This came after Cruz found a hole in the Cowboys' defense while Manning began to navigate the pocket. Cruz caught the 3-yard touchdown pass and went into full-out dance mode. It appeared so natural it was almost as if he'd been practicing.

But there were points throughout the past two years (including this summer) when nobody knew if he'd ever really have the opportunity to dance in an end zone in a real NFL game. Manning admitted Cruz had a setback in the spring and there was a groin injury that slowed him this summer.

The Giants threw Cruz right back into the mix the week of the third preseason game with an eye on this Sept. 11 opener against the Cowboys.

"We built Victor up to a point where he felt he could play a full game for us," coach Ben McAdoo said. "I'm sure he's excited. I'm excited for him."

Cruz played almost every offensive snap for the Giants on Sunday. He caught all four passes thrown in his direction. He scored a touchdown. He danced the salsa. It was a successful return in almost every way imaginable, and "it felt great," Cruz said. Even if he had to wait a year longer than he wanted, the return was even better than he imagined.

Manning connects with Cruz to put Giants ahead
Eli Manning throws a 3-yard strike to Victor Cruz for the touchdown to put the Giants up 20-19 over the Cowboys.

Cruz: Touchdown dance came back naturally to me
Victor Cruz talks about how it felt to be able to do his trademark salsa touchdown dance after missing over a year and a half of action.
Related topics:
sportsespnreceivervictor cruznflnew york giantsreturn
Copyright © 2020 ESPN Internet Ventures. All rights reserved.
More Videos
From CNN Newsource affiliates
TOP STORIES