Victor Oladipo: 'No question' anthem protests will happen in NBA 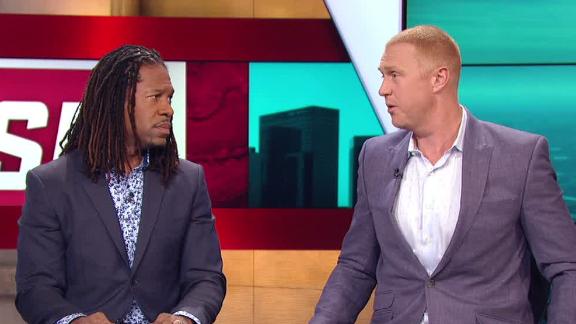 As the NBA prepares to open training camps -- and the issue of athletes' protests during the national anthem shows no signs of abating -- it was only a matter of time before basketball players would be asked about what they plan to do.

Oklahoma City Thunder guard Victor Oladipo was asked by Complex Sports whether NBA players are paying attention to Colin Kaepernick's protest of racial oppression and inequality in the United States -- and whether those protests would transfer to the NBA.

"Oh, no question. I truly believe it will," Oladipo said. "Because at the end of the day it's a sport, and people are gonna be looking at some guys in the NBA to see what they're gonna do as well. At the end of the day you just control what you can control, so your opinion is your opinion, that's the beauty of the United States, so, do whatever you feel is best that will help you do whatever you believe."

Kaepernick, a quarterback on the San Francisco 49ers, has drawn a great deal of attention for choosing to sit during the playing of the anthem in the 49ers' second-to-last preseason game. After a storm of discussion and criticism for his initial action, he then chose to kneel in the final preseason game and the 49ers' Week 1 game against the Los Angeles Rams.

Other players have chosen to join Kaepernick in his protest. Their gestures have included kneeling, linking arms with teammates and raising fists during the song.

Oladipo, who was acquired from the Orlando Magicin June,also was asked whether it's something he had discussed with his teammates. While he said he has not, he expects to see at least a few NBA players with their own protests.

"A few people just in general I've had conversations with about that, I tell 'em the same thing, people's beliefs are people's beliefs, you know what I mean, you can only control so much, you can only control what you can control, and the most things you can control is yourself," Oladipo said. "So whatever you believe, believe in to the utmost. But I think definitely, we'll see a few guys in the NBA doing the same thing."

Golden State Warriors MVP Stephen Curry said at the convention TechCrunch in San Francisco on Tuesday that he will "most likely stand" when the anthem is played.

"If you follow the way [Kaepernick] talks and the message he's trying to send with his act, from his mouth, he's not disrespecting veterans. He's not disrespecting military. That's not his intention," Curry said. "He's obviously continued the act to create a conversation for more social justice and things of that nature. So, I've been a part of certain conversations off the grid, and finding different ways to make our community better, especially for African-Americans. And so, that's not the way that I would do it, but I support him in his attempt to start a conversation or continue the conversation."

In 1996, then-Denver Nuggets player Mahmoud Abdul-Rauf created controversy when he refused to stand for the anthem before games, saying the flag was a symbol of oppression in the nation, and that the U.S. had a long history of tyranny.

Abdul-Rauf also said standing would conflict with his Islamic beliefs. In March 1996, the NBA suspended Abdul-Rauf for one game, but he quickly worked out a compromise in which he would stand but could close his eyes and look down during the song. He said he usually recited a prayer to himself.