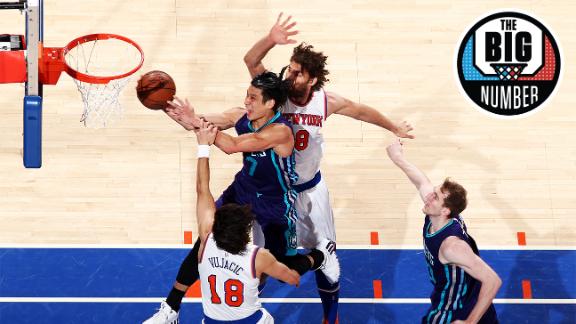 Jeremy Lin hasn't been the recipient of a called flagrant foul over the past three seasons, and a group of fans is starting to wonder why.

A YouTube video titled "Jeremy Lin: Too Flagrant Not to Call" depicts a series of hard fouls on the Charlotte Hornets guard and compares them to other players who drew flagrant foul calls. The video has received more than 1 million views since it was posted earlier this month.

The video was the project of Hsiu-Chen Kuei, who along withJenny Wei andKoon-Ping Chan wrote a form letter for fans to send to the NBA to try to draw attention to the situation.

"I'm just happy that people are noticing this," Kuei told The New York Times on Tuesday. "It's not about views. I didn't get money or anything. I didn't want attention. I just want Lin to get fair calls."

Lin has drawn 813 fouls since 2013-14 with none being a flagrant foul. That's the most fouls drawn by a guard without a flagrant foul call, according to NBA StatsCube, and third most among all NBA players, behind only Oklahoma City Thunder forward Kevin Durant and Chicago Bulls center Pau Gasol.

Lin addressed the video and being on the receiving end of hard fouls Sunday.

"I'd love to get more calls. It is part of it. You have to play through it," Lin said. "... I'm just thankful the fans are trying to do something about it and trying to push the league to at least review some this stuff."

The NBA responded to the online petitioning with a statement confirming the referees' decisions that none of the fouls on Lin in question were flagrant.

Kuei told the Times she was disappointed by the league's reaction but has been encouraged by the discussion the video has generated.

"Through this, I just want to make sure the rules apply to every player and players get protected by the rules," Kuei said.

Kuei said she has enough examples to make a second Lin video if she feels he is being treated unfairly during the playoffs. The Hornets open the first round Sunday against the Miami Heat.