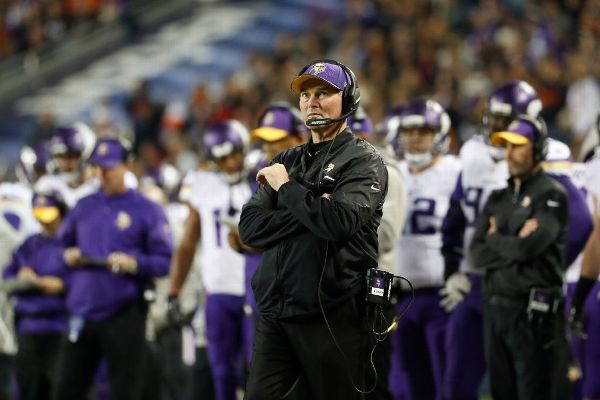 MINNEAPOLIS -- After missing the first game of his NFL career on Thursday night because of a detached retina, Minnesota Vikings coach Mike Zimmer resumed his coaching duties on Monday.

Zimmer is expected to travel with the team for the game against the Jacksonville Jaguars on Dec. 11, the team said in a statement.

The coach had another operation on his right eye on Friday, after a follow-up appointment on Friday morning. Zimmer had emergency surgery on Wednesday -- his third operation of November on his eye -- and did not coach in the Vikings' 17-15 loss against the Dallas Cowboys.

Special teams coordinator Mike Priefer filled in for Zimmer on Thursday night, while defensive coordinator George Edwards took over Zimmer's play-calling duties on defense. Priefer said he was ready to coach another game in Zimmer's place if the coach was not able to return for the Jaguars game, but Priefer added on Thursday night, "I hope I'm not needed in that capacity."

The Vikings held the Cowboys to a season-low 264 yards, and became the first team to sack Dak Prescott at least three times since Week 2, but their loss dropped the Vikings to 6-6.

The Vikings have lost six of their last seven games after a 5-0 start and fell two games behind the Detroit Lions in the NFC North after the Lions won at New Orleans on Sunday. A favorable finishing schedule, though, gives the Vikings a chance of winning out and possibly making the playoffs with a 10-6 record.
Related topics:
sportsespnmike zimmerminnesota vikingsnfl
Copyright © 2022 ESPN Internet Ventures. All rights reserved.
TOP STORIES
Where abortion stands nationally: State-by-state breakdown of laws
How does overturning Roe v. Wade affect IVF treatments?
SF Pride Parade and Celebration | Watch live Sunday on ABC7
What does Supreme Court decision on abortion rights mean for CA?
Planned Parenthood responds to SCOTUS decision: 'Do not lose hope'
Rep. Speier: SCOTUS abortion ruling is 'mandating pregnancy'
Brian Laundrie confession letter released: 'I ended her life'
Show More
Biden vows to 'do all in my power' to protect abortion access
What to know: Many fires burning across SF Bay Area right now
How personal data could be used to enforce anti-abortion laws
SF Pride: What to know about events, performers, live stream
ABC7's new 24/7 live stream offers local news, weather
More TOP STORIES News