Villanova jumps Kansas, moves back to No. 1 in AP poll 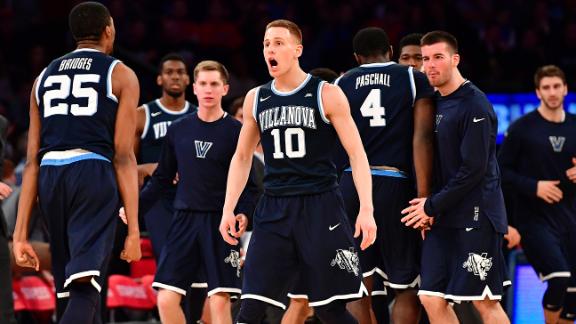 The Wildcats are back on top.

"It was great to be No. 1. I'd much rather be No. 1 than three," Wright said last week after a stumble against then-No. 18 Butler dropped the national champs a couple spots.

Now, after a week away from No. 1, Villanova on Monday reclaimed the top of The Associated Press Top 25. The Wildcats leapfrogged Kansas after Baylor lost while playing as a No. 1 team for the first time in school history.

The Wildcats received 28 first-place votes and 1,580 points from a 65-member national media panel while the Jayhawks remained No. 2 despite getting more No. 1 votes.

Villanova (17-1) bounced back to win three straight in easy fashion, including a blowout of then-No. 15 Xavier.

Wright was just finishing pregame before facing Seton Hall on Monday night when he told the AP his players weren't even aware they were back on top. Then, he acknowledged he wasn't even sure how the voting was done.

"I think what happened the year before carries all the weight, maybe," Wright said. "I always look at it each week, but I don't analyze the voting."

Once the point totals were explained, Wright replied: "So that's how it works? I learned that today. You taught me something."

The Jayhawks (16-1) have put together a nation-leading 16-game winning streak. But that streak includes nip-and-tuck wins over Kansas State, Oklahoma and Oklahoma State the past couple weeks. The Jayhawks got 32 first-place votes this week and 1,562 points.

"We've been pretty consistent for 16 straight games," Kansas coach Bill Self said over the weekend. "Certainly, I feel like we've done more than we had done two weeks ago or whatever. Who knows if that means anything? It's really not a big deal. I'd much rather be 5-0 in the league."

Asked whether being No. 1 mattered to him, Kansas guard Devonte Graham replied: "No. It's too early in the season, especially in conference play."

"Being No. 1 would be nice," Graham added, "but it really doesn't mean nothing this early."

UCLA (18-1) moved up one place to third and received three first-place votes. Gonzaga (17-0), the only unbeaten team in Division I, went from fifth to fourth and had the other two No. 1 votes. Kentucky moved up one place to fifth, followed by the Bears -- who were routed by West Virginia and squeaked past Kansas State -- while the Mountaineers and Creighton were tied for seventh.

South Carolina and Maryland were the week's newcomers, replacing Minnesota, Kansas State and Southern California. The Wildcats and Trojans had been tied for 25th.

The Gamecocks and Terrapins were both ranked earlier in the season.

There are plenty of games involving ranked teams that could cause another big shuffle this week, beginning Monday night. Villanova played Seton Hall (12-5) and Kansas visited Iowa State (11-5) in a pair of tough tests for the nation's top two teams.

Creighton and Xavier also met Monday, and Notre Dame visits Florida State on Wednesday night in an ACC showdown. The Seminoles also get a visit from Louisville on Saturday while Arizona faces UCLA and South Carolina heads to Kentucky for crucial conference games.

Villanova has become accustomed to having a target on its back, something Wright said his veteran team led by Josh Hart and Jalen Brunson relish.

"There's a lot of challenges to it," he said, "but mostly we are always trying to concentrate on the next game, trying to get better, because it's most important where you end up."

Villanova overtakes Baylor atop ESPN Power Rankings
After a blowout win for Nova over Xavier and a sloppy loss by Baylor to West Virginia, the defending champs regain the No. 1 spot. But no team fell as far in this week's update as did Duke, now 0-3 in true road games.