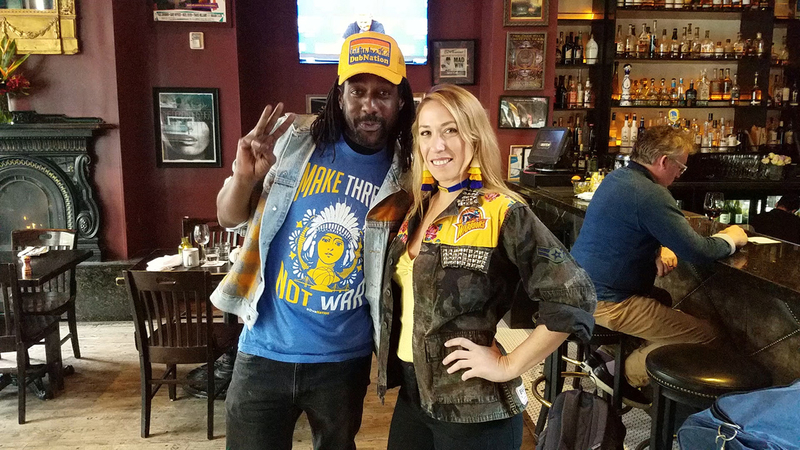 SAN FRANCISCO (KGO) -- You never know when a business opportunity will hit you. For Luke Fraser, it all started about a decade ago when he got season tickets for the Golden State Warriors. It was during the "We Believe" years, when the team made an unexpected run in the 2007 playoffs by knocking out the heavily favored Dallas Mavericks.

Fraser wanted to show his Warriors pride in a unique way, so he went to a thrift store and threw together an outfit with vintage Warriors gear. Soon he was buying old Warriors pieces, cutting them up and making custom clothes for himself and his friends.

"The Warriors are my muse," said Fraser during as stop at The Brixton in San Francisco. He was there setting up a display of the clothes he and other artists made to sell during the Warriors playoff game against the Houston Rockets.

The display has Warriors-themed t-shirts inspired by pop artists like Andy Warhol and Keith Haring, "Dub Nation" and "Town" caps with a hidden pocket, and blue and gold tassel earrings. But the most popular items are re-purposed camouflaged jackets with patches of vintage Warriors logos.

"We basically dig up old patches the way someone might take an old Chevy and put a new engine on it and make something totally different," said Fraser. The jackets are brightened up with fabrics including floral prints, American Indian patterns and flannel.

WE ARE DUB NATION: Meet some of the Warriors' fiercest fans
EMBED More News Videos

Houston, are you ready for this? Dub Nation is.

Ironically it was a tragedy that helped him grow his business. Fraser lost all his merchandise during the North Bay fires. He had all his clothing stored at his brother's house in Glen Ellen. After the fires, Fraser concentrated on making just a few items. He sells his creations at farmer's markets and pop-up events. He was voted "Best local sports gear made by local sports fans" by Oakland Magazine last year. His clothes has even gotten the attention of some of the Warriors.

"David West came up and thanked me once," noted Fraser. He's not the only one noticing.

"When I get on Bart, the whole train gets quiet and everybody starts whispering, 'What is that,'" said Fraser of his camo jacket. "I could wear a $5,000 Gucci jacket and I don't think anybody would care, but something about these jackets really seems to get people's attention. I get chased down the street when I wear them."

Fraser has teamed up with 10 other artists to create fan fashion. He said about 20 more will join his marketplace soon. Their merchandise is available online at bartbridge.com.