Von Miller 'happy for' Dontari Poe, 'would have done it the same way' 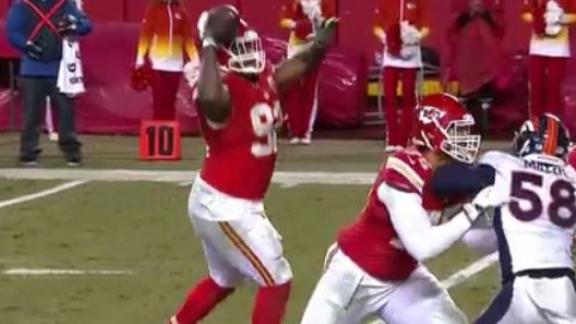 KANSAS CITY, Mo. -- Not only did the Kansas City Chiefs officially crush theDenver Broncos' playoff hopes on Sunday night, they did it with a 346-pound exclamation point.

Chiefs defensive tackle Dontari Poetook a direct snap with 1 minute, 55 seconds to play and tossed a 2-yard scoring pass to tight end Demetrius Harris. The Chiefs already had the game well in hand, and Poe's touchdown toss made it 33-10, which would hold up as the final score.

The Broncos, now 8-7 and officially out of the playoff race, said they weren't any more frustrated with the play than they were with their effort.

"I would have saved it for another game, if I was them,'' Harris said. "They might need it more later, and now it's out. I mean, you don't like that stuff, but we've won the AFC West every year, man. It's their first chance to actually win it -- about time somebody beat us.''

The Broncos had prepped for Poe to be in the Chiefs' goal-line package in some fashion -- the Chiefs have used it many times previously -- but the players said they weren't ready for the 346-pounder to throw the ball.

Reid said he ran the play because he was simply trying to score as many points as possible.

"I've learned this over time: You can't score enough points against these teams,'' Reid said. "We don't take anything for granted. We're going to score as much as we can do it.''

Poe took the direct snap and actually started to run toward the line of scrimmage, as if he were simply going to try to power the ball over the goal line. But as he approached the line, he stopped and suddenly jumped in the air, tossing the ball to Harris.

In doing so, Poe became the first defense-first player to throw a touchdown pass since 1981.

"There was time on the clock, and they were close enough to score a touchdown ... it's football,'' said Broncos cornerback Aqib Talib. "When they get inside the 10, they're going to go with some crazy kind of formation, crazy plays. This time, they had a D-tackle pass for us.''

"I'm happy for the big guy,'' Miller said. "The loss is unfortunate ... they were up, they had the opportunity to score a touchdown. If the joystick was in my hand, I probably would have done it the same way. It's all good, and we'll see those guys two times next year.''

Kansas City is still in the mix for the AFC West title. To clinch the division, the Chiefs have to win Sunday in San Diego and the Broncos must beat the Oakland Raiders.

Several other Broncos said they weren't annoyed by the play. But those same players said they expect when they prep for Kansas City in 2017 that the play will be mentioned along the way.

"Great play by them," said Broncos safety Darian Stewart. "Oh yeah, absolutely ... any time a defensive lineman throws a touchdown on you, you definitely remember that."

346-pound lineman Poe throws jump pass for TD in Chiefs' win
With the Chiefs at the goal line, they bring in the big man, 346-pound Dontari Poe, to take the direct snap. After faking the run, Poe instead throws a jump pass to Demetrius Harris for the touchdown.