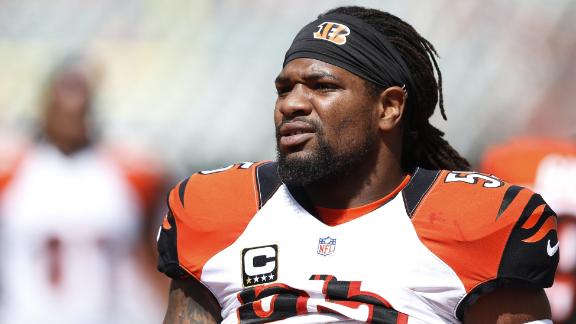 Burfict, the source said, has been warned that he's considered a repeat offender subject to escalating discipline and that any future incidents of this kind will result in his being summoned to the league office.

On Tuesday, a source told Werder the league would review allegations that Burfict deliberately twisted the ankles of Newton and Olsen as they lay on the ground after touchdowns. Panthers coach Ron Rivera sent tapes of the plays to the league office supporting the accusations. A source said that the tapes reveal the ankle-twisting is more obvious on the Newton play than on the play Olsen was injured.

"This happens more than you think and more than it should," a league source said. "Burfict is one of those guys. Always on the edge."

Bengals coach Marvin Lewis was asked repeatedly Wednesday about Burfict's aggressiveness and reported fine, and he refused to comment beyond saying Burfict and the defense as a whole could play better.

"Yeah, I was" surprised, Jones said. "Because there was no flag. And Vontaze plays with great emotions and I don't think he should have been fined $25,000 for it.

"It is what it is. Vontaze will take that one on the chin. He can't change the way he plays."

Also Wednesday,Newton said he didn't want to talk about Burfict and that his focus is on Green Bay.

Olsen, who on Monday was outspoken that Burfict should be suspended, took a similar approach.

"No, I'm not,'' he said when asked if he was disappointed by the league's ruling. "I said how I felt about it on Monday. The league is the one that handles punishment and they decide the course of action and we all go about our day. I've moved on from it and it's not something I continue to think about."

Asked if he felt the fine sent the proper message, Olsen said it wasn't his place to comment on league policy.

"They thought [that] was right and that's the way it goes,'' he said. "On Monday, I addressed how I felt and that was my reaction to what had gone on and what was evident. We let the chips fall where they may and people who are much higher up the ladder than me make the decisions. I've been on to Green Bay for the last two days."