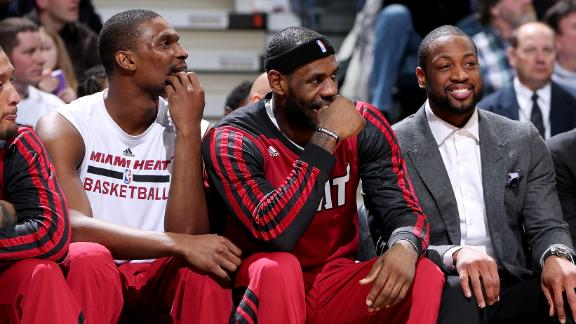 Miami Heat teammates Dwyane Wade, LeBron James and Chris Bosh all have opt-outs in their contracts at the end of this season, but no collective decision has been made as to whether they will all choose to test the free-agent waters.

The three met before they made their free-agency decisions in 2010 and could have another such meeting before their June 30 opt-out deadlines, which allow them to leave in 2014, 2015 or 2016.

Wade revealed on Tuesday as part of an interview for the cover story of an upcoming issue of ESPN The Magazine that the three, who have gone to three straight Finals and won the last two, plan to have that conversation at some point.

"I'm at a position where I don't really have to worry about it," said Wade, who also won a title with the Heat in 2006. "I've been with the same organization for now 11 years. We've won multiple championships, so it's no reason where I need to think about that yet. I'm not at a point where we are a bad team and I need to think about the future, so right now I'm really focused on just enjoying this team, enjoying our quest to try to three-peat. And when the season is over, and whatever happens, then I will sit down with Chris and I will sit down with Bron and I will sit down and make the best decision for myself and my family."

"When we sat down and we signed our deals and all of us made sure we had an opt out in that fourth year, that was our option, so the option is there and you would hope that someone wants to be able to use their option as a player," Wade said. "As players, you only have so much time and you only have so many moments where you have the ability to control your own fate, so it's not a bad thing at all if that's what someone is thinking. I haven't had that conversation with Chris. I haven't had that conversation with Bron."

Wade took a pay cut and less than a max deal to help the Heat add depth to the roster in 2010 and it's possible the team could approach him about doing so again this summer.

Wade is due $42 million over the next two seasons, which would be the most lucrative contract years of his career. But the Heat could try to persuade Wade and the others to take another discount in the name of more titles.

The Heat are facing the prospect of becoming the first team to pay the new "repeater tax," which could triple or quadruple luxury tax penalties from their rates when the Big Three signed in 2010. In recent years, players like Kevin Garnett and Tim Duncan have used opt-outs in their contracts, lowering their salaries to help their teams deal with tax issues while getting more guaranteed years in return.