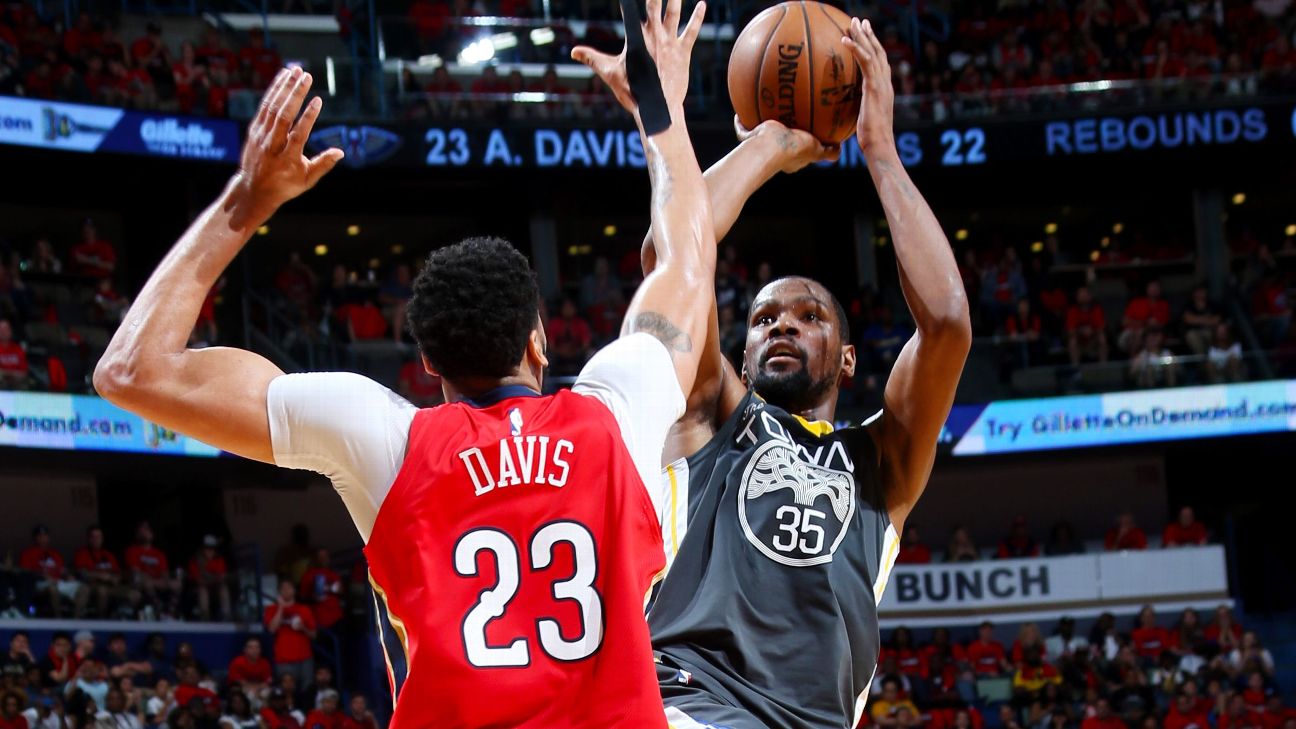 NEW ORLEANS -- The Golden State Warriors played the kind of basketball that has defined their championship reign: total domination.

Golden State cruised to a118-92 rout of the New Orleans Pelicanson Sunday afternoon in Game 4 of the Western Conference semifinals to take a 3-1 series lead.

After a porous effort in a Game 3 defeat, the Warriors knew they had to set a better tone against a Pelicans group that came in brimming with confidence.

Mission accomplished for the defending champs.

Kevin Durant dominated offensively to the tune of 38 points, 9 rebounds and 5 assists, while Stephen Curry added 23 points of his own.

"It's Kevin Durant," Pelicans guard Jrue Holiday said. "They have -- all he takes is about 2s, but when you don't miss too many of them, they work He played well, he shot well, and again he's locked in for his team."

As great as Durant's offensive performance was, it was the Warriors' engaged defense -- absent throughout Game 3 -- that made the biggest difference.

Warriors head coach Steve Kerr added his own tone-setter prior to the game by inserting veteran Andre Iguodala into the starting lineup. The change paid immediate dividends, as the Warriors raced out to an 18-point, first-half lead that they never relinquished despite a short burst by the Pelicans at the end of the half.

"I told you right from the start, you're not going to beat them if you can't score 115 points," Pelicans head coach Alvin Gentry said. "I don't care how good your defense is, I don't care what you do, you have to be able to score 110, 115 points to have any chance to beat them. I didn't think that we had any kind of push, or the pace of the game wasn't anywhere where we need to have it to [try to] win the game. We didn't shoot the ball well. Some of that was us, some of that was them. But to score 92, you won't have a chance to beat them."

Pelicans star Anthony Davis had his usual box score-stuffing performance with 26 points and 12 rebounds, but he went just 8-for-22 from the field. The Warriors' defense gave the Pelicans fits throughout the day, forcing the high-flying group into tough shots and some mental mistakes.

The Pelicans came into the game averaging 123 points per game in their first three home playoff games this postseason, according to ESPN Stats & Information research, good for first in the NBA. That scoring momentum disappeared early Sunday as the Warriors committed to changing the game on the defensive end.

Aside from continuously throwing bodies at Davis and clogging his airspace, the key differences for the Warriors came in limiting Pelicans difference-makers Rajon Rondo and Nikola Mirotic.

Rondo, who had 21 assists in Game 3, shot just 2-for-10 from the field and had only six assists, while Mirotic went just 1-for-7 from the field as the Golden State defense swarmed both players.

The Warriors have a chance to close this series out on Tuesday night in Oakland and clinch a berth in the Western Conference finals. The Pelicans are clinging to hope that they will live to see another playoff day.

"Right after the game, everyone's down and frustrated," Rondo said. "It's not like somebody's coming in smiling. By the time we get off the plane, we'll be fine. We've got some things to clean up. Our defensive discipline wasn't the best today. We kind of relaxed a couple possessions, and they made us pay, so we're looking optimistic about Game 5 ... we'll be fine.

Warriors bounce back to take 3-1 series lead
Kevin Durant leads the Warriors with 38 points and Steph Curry adds 23 of his own as the Warriors rout the Pelicans 118-92.

KD drills 3 over Davis
Kevin Durant pulls up from deep and sinks it over the tough defense by Anthony Davis.