Warriors hold off Raptors 106-105 on off night by Curry 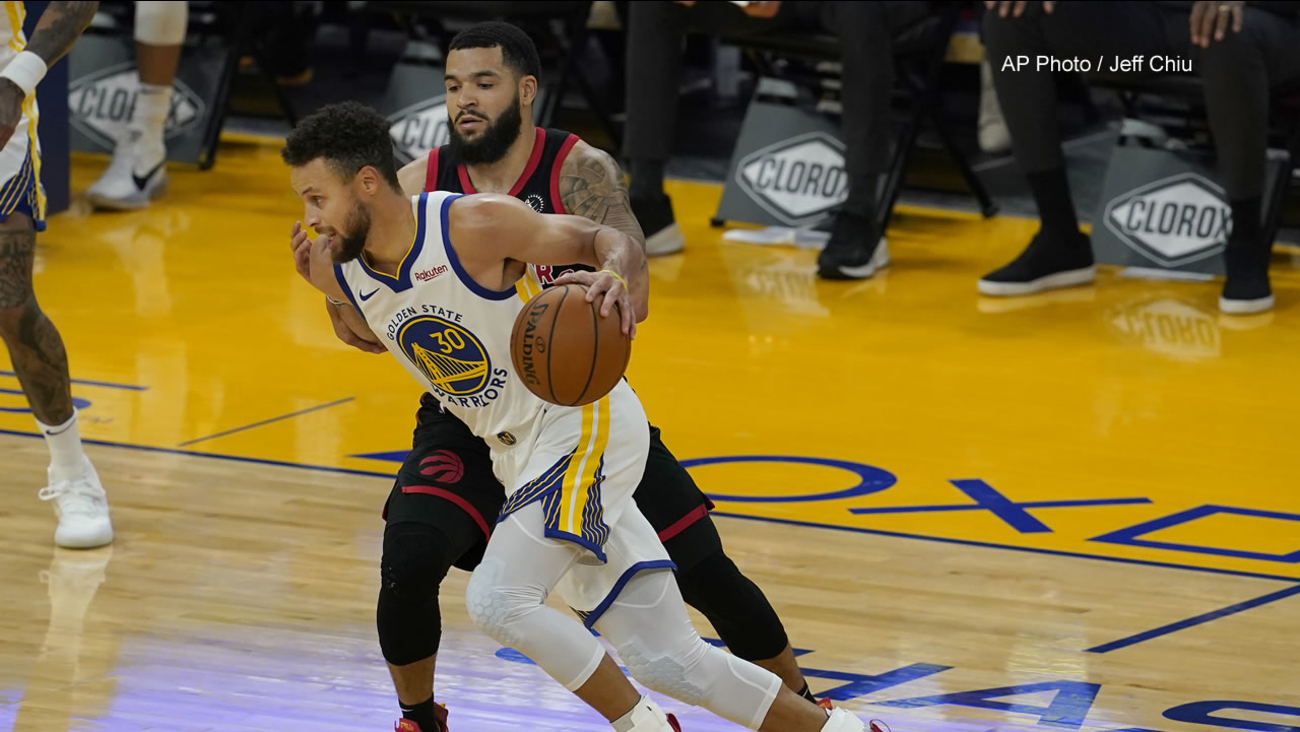 SAN FRANCISCO -- Damion Lee converted the tying and go-ahead free throws with 3.3 seconds left and the Golden State Warriors withstood a rough fourth quarter to hold off the Toronto Raptors 106-105 on Sunday night despite uncharacteristic struggles by Stephen Curry.

Pascal Siakam missed a jumper as the buzzer sounded but finished with 25 points, and Fred VanVleet scored 21 for Toronto in a rematch of the 2019 NBA Finals won in six games by the Raptors.

The Raptors challenged a foul call on Kyle Lowry beyond the right side of the arc that originally would have given Lee three shots. It was determined on review the foul was before the shot -- the third play that went to replay in the final 34.4 seconds. All three calls were confirmed.

Andrew Wiggins had 17 points and matched his career high with four blocked shots as Golden State nearly squandered away a game it led by 17.

"I've shot 0-11 one time, 1-10 and everything in between. Mostly it's just keep shooting..." Stephen Curry on an "off shooting" night, adding he's not worried. Remember, just last Sunday he scored a career-high 62 points. #ABC7Now #DubNation

Curry shot 2 of 16 and missed nine of his 10 3s for 11 points after scoring 143 over his previous four games, including a career-high 62 one week earlier against Portland.

Kent Bazemore made a go-ahead lay-in with 1:06 to play for Golden State before VanVleet knocked down a jumper on the other end.

Warriors coach Steve Kerr shares how he got to fine Drake $500 after he and Steph Curry ran late for a flight years ago.

Curry turned the ball over with 34.4 seconds remaining and that went to review. Lowry missed a 3-point try and Golden State got one more chance with 7.6 ticks on the clock _ another review that stood determining it was Warriors ball.

Lowry missed Friday's game for personal reasons but returned and contributed 17 points, nine rebounds and six assists. His layup with 7:13 remaining pulled the Raptors within 94-90. VanVleet's basket at 4:05 made it a one-point game before Kelly Oubre Jr. hit his first 3-pointer of the night moments later.

Warriors rookie James Wiseman made 5 of 7 shots and added 10 points and seven rebounds. Eric Paschall scored 15 points off the bench on a night the reserves produced 46 points. Lee had 13 with three 3s.

Late in the third, Golden State's defense showed just how much it is doing for the Warriors: drawing a 24-second violation by Toronto one possession then Yuta Watanabe stepped out of bounds the next. Toronto committed another shot-clock turnover in the fourth.

Curry didn't take his first shot until sinking a 12-foot jumper with 2:50 left in the first.

"Forget my shooting, we don't win a game like this without our defense taking strides in the right direction..." Stephen Curry talking team improvement defensively this season. #Warriors are 6-4 overall to begin the year. #ABC7Now #DubNation

The Warriors' starters are still working to get in sync with so many new faces added to the mix.

"If I play better, that lineup will play better,'' Green said of Golden State's starting five finding a groove. He added 10 points, 10 assists and nine rebounds.

Toronto had won three straight in the series, most recently beating the Warriors to clinch a playoff berth in March 2020.

"The result couldn't have been any better in terms of winning but learning a lot of valuable lessons..." after #Warriors win tonight over #Raptors . Golden State improves to 6-4 overall. #ABC7Now #DubNation pic.twitter.com/mqQ2vp5HA5

For their "Educators Night,'' the Warriors hosted 50 fans from the Oakland and San Francisco Unified School Districts to watch from their virtual fan section at Chase Center, recognizing them for their essential work. Kaiser Permanente donated $40,000 to be split evenly between districts.

Raptors: Chris Boucher had six blocks before fouling out against his former team. ... Toronto missed its first nine shots and initial five 3s. ... The Raptors are 1-5 on the road.

Warriors: Wiggins didn't practice in Saturday's light shootaround session but was probable despite a sore left quad _ and Wiggins has still scored in double figures every game.

"I spilled a little spaghetti sauce on my box-and-1 sweatshirt today in pregame so out of luck there, Raptors coach Nick Nurse said of defending Curry.