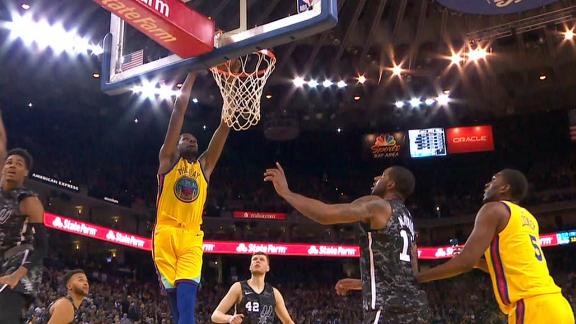 OAKLAND, Calif. -- During a San Antonio Spurs strategy meeting to figure "out how we're going to stop the [Golden State] Warriors," coach Gregg Popovich heard a distracting tapping sound to his left.

"He's got a computer in there, and he's just pounding away, and he happens to be Nick Kerr," Popovich joked. "I'm thinking, what's wrong with this picture? He's obviously sending everything to his father."

But it's clear the Warriors didn't need extra reconnaissance Thursday with Kevin Durant lighting up the Spurs for 14 consecutive points in the fourth quarter to finish with 37 on the night and 11 rebounds to lead Golden State's 110-107 comeback victory. Draymond Green recorded his third triple-double of the season and franchise-best 22nd of his career with 11 points, 12 rebounds and 10 assists as one of five Warriors to score in double figures.

"KD was just breathtaking down the stretch, amazing," Warriors coach Steve Kerr said. "I just liked our fight. I thought we actually played all right for most of the game. We didn't turn it over, played pretty good defense. We just couldn't make a shot. But we also didn't raise the level of competition to that fever pitch that we need until the final few minutes. Kevin was instrumental in that, just kind of taking over the huddle and taking over the game."

From there, Durant scored 12 consecutive points in two minutes and 22 seconds to tie the game at 105-105.

"We were down eight [points]," Durant said. "We got some good shots. I got fouled on the 3-pointer, and I think that's what got me going. It was three free throws. I just tried to press 'go,' and tried to get a good shot every time."

Davis Bertans fouled Durant on a 3-point attempt with 3:51 left to play, and the Warriors forward knocked down all three foul shots to pull Golden State within four points, 103-99.

Two minutes, 18 seconds later, the Warriors took their first lead since the 4:29 mark of the third quarter.

"Down the stretch, we gave up two offensive rebounds back to back," Popovich said. "After we made stops, they got possessions. They shot a 3, and we fouled Durant. That was the ballgame."

According to ESPN Stats & Information research, the Spurs have been outscored by 31 points in clutch time (defined as the final five minutes with a game within five points) since Feb. 1, which ranks as second-worst in the NBA in that time. Only the Memphis Grizzlies are worse in that statistic. Opponents have outscored the Spurs 86-55 in clutch time since the start of February, and they also rank last in the NBA over that span in net efficiency in clutch time (-56.5).

Golden State captured its seventh consecutive victory, and moved within a half game of the Houston Rockets for the top spot in the Western Conference standings.

San Antonio, meanwhile, presided over yet another fourth-quarter meltdown; the sixth straight resulting in a loss. In their previous five defeats, the Spurs surrendered fourth-quarter leads, including three of the double-digit variety. So, familiar feelings of previous fourth-quarter failings creeped in when Golden State ran off a 6-0 run in the first 1:02 of the fourth quarter to close to the gap to 87-84, before Durant eventually closed out the show.

"We lost the game," Spurs point guard Tony Parker said. "Not good enough. I think we just have to learn from our mistakes at some point. Down the stretch, we have to execute better. It's like 10 games, 12 games that we've lost like that now."

The Warriors received even more alarming news, when Curry suffered his injury on a driving transition basket with Aldridge and Murray defending. It appeared Curry didn't actually twist the ankle until after absorbing the foul, landing and taking a couple of steps toward the stanchion. The injury goes down as Curry's fourth right-ankle sprain since early December. He left the game on San Antonio's ensuing possession, after sinking two free throws for Golden State's first points of the game, and headed to the Warriors' locker room.

The team announced in the second quarter Curry would not return.

"We've got to be careful with it," Kerr said. "We'll talk with our training staff the next couple of days and see where we go."