'It's been two long years': Curry, Warriors return to NBA postseason with play-in game vs Lakers 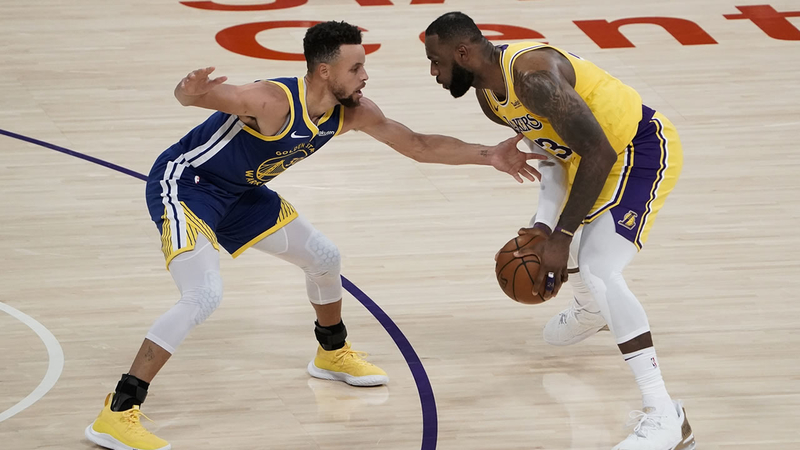 Warriors return to NBA postseason with play-in game vs. Lakers

LOS ANGELES (KGO) -- The NBA couldn't have drawn it up any better -- Stephen Curry and the Golden State Warriors taking on LeBron James and the Los Angeles Lakers in the NBA's inaugural play-in tournament.

When the Warriors and Lakers take the floor Wednesday night at Staples Center (7:00 p.m. on ESPN) it will be the marquee match-up of the league's new play-in tournament to advance in the playoffs.

RELATED: Lakers defense braces for Warriors' 'head of the snake' in Stephen Curry

Due to the COVID-19 pandemic, the regular season started in late December and with 72 regular season games instead of 82, the NBA created a play-in tournament to allow for more teams to have a chance at making the postseason.

Counting the hours and minutes until the @warriors & @Lakers tip-off! Can it just be Wednesday at 7:00 PM already?!? #ABC7Now #DubNationhttps://t.co/onwSD5gxhN pic.twitter.com/xbXbnc1Qsi

"We've missed those moments and those experiences," said Warriors superstar Stephen Curry. "It's been two long years (since we've been in the postseason) to even get back to that type of momentum, so excited about being in this position and what it took to get here."

After a run of five straight NBA Finals appearances, Curry and the Warriors were ravaged by injuries in the 2019-2020 season and Golden State finished with the worst record in the league in a season interrupted by the pandemic.

The Los Angeles Lakers ultimately won the NBA Finals over the Miami Heat in the NBA bubble in Orlando.

"Playing Steph Curry and the Warriors is always a tough match-up when we play those guys," said Lakers forward/center Anthony Davis. "We look at it as a Game 7 for sure."

The Play-In Tourney is upon us, and we're starting out as the No. 8 seed.

So.... what does that mean for the Dubs? We've got you covered.@kpthrive || #DubNation pic.twitter.com/pC9V2zRyL9

The loser of tomorrow night's game, will host an elimination game on Friday night against the winner of Wednesday's San Antonio - Memphis game. The winner of Friday's game will then travel to Utah to face the Jazz.

"It's what you live for. These are the games, you know you are out in your backyard as a child. Bright lights, you are playing against LeBron James and the Lakers," said Warriors forward Kent Bazemore.

Golden State has exceeded most preseason predictions, especially following the injury of Klay Thompson just before the season started. Stephen Curry just won his second regular season scoring title and is excited about another postseason run with the Warriors.

"Nobody thought we were going to even be in this position," said Curry. "A lot of people had us way, way, way down the standings coming in after Klay got hurt. So there's a lot of things we've already flipped on it's head to this point, so we might as well keep going."

Warriors and Lakers tip-off Wednesday night at 7:00 p.m. on ESPN.