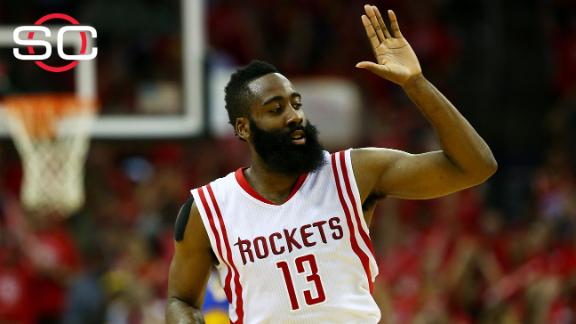 Maybe there's enough urgency to go around that both the Houston Rockets and Golden State Warriors will play at a level that's appropriate for the Western Conference finals. The Warriors didn't begin the series that way, the Rockets were mysteriously passive in their first home game, and the Warriors treated Game 4 as if their preparation consisted of reading the statistics about how all 116 previous NBA teams that went ahead 3-0 wound up winning the series.

The Warriors should be sufficiently jolted after watching Stephen Curry crash to the court in the second quarter of Game 4. They actually played their best stretch of the game when the action resumed, most notably by Klay Thompson. Curry checked out OK, but the prospect of advancing to the NBA Finals without subjecting him or anyone else to additional peril rid them of any remaining complacency.

The Rockets remain on the brink of elimination, a situation that has brought out the best in them throughout these playoffs. They're now 4-0 in those circumstances, dating back to when they fell behind 3-1 to the Los Angeles Clippers in the second round. Maybe it's because it seems to bring out the best in Josh Smith.

Smith was the last-gasp tactical adjustment for Rockets coach Kevin McHale in the Clippers series. Smith went from a plus/minus of minus-68 in the first four games as a reserve to a plus-46 in the final three games. It didn't carry over to the conference finals, as Smith had a diminishing impact plunging to an astounding minus-35 in Game 3. But Smith helped get the Rockets going in Game 4, with three 3-pointers in the first six minutes and he made 7 of 8 shots.

When Smith is hyper-efficient it's the Daryl Morey system coming to its ultimate fruition. The Rockets GM should save the box score and shot chart from Game 4 and present them at the next Sloan Sports Analytics Conference. It's basketball the way Morey envisions it: heavy on the shots in the paint, 3-pointers and free throws, with few offerings from midrange.

But the conference finals -- both Western and Eastern -- have also been a resounding affirmation of the NBA's tried-and-true star system. The three teams still standing feature the top three in the NBA Most Valuable Player balloting -- Curry, James Harden and LeBron James. The Atlanta Hawks won 60 games in the regular season but didn't have a player among the top 10 in the MVP race ... and they didn't win a single game in the conference finals.

Curry and Harden have each had 40-point games in this series. Dwight Howard has bounced back from the knee injury that limited him in Game 1 to post double-doubles the past three games and forced the Warriors to miss 6 of 7 shots at the rim in Game 4, according to the NBA's SportVU data.

This series has the stars and the shooters. What it's lacked has been a consistent 48-minute effort from both teams simultaneously. The Rockets are trying to extend their season. The Warriors are trying to end a 40-year drought of Finals appearances. It shouldn't require a Google search for these two teams to find motivation.