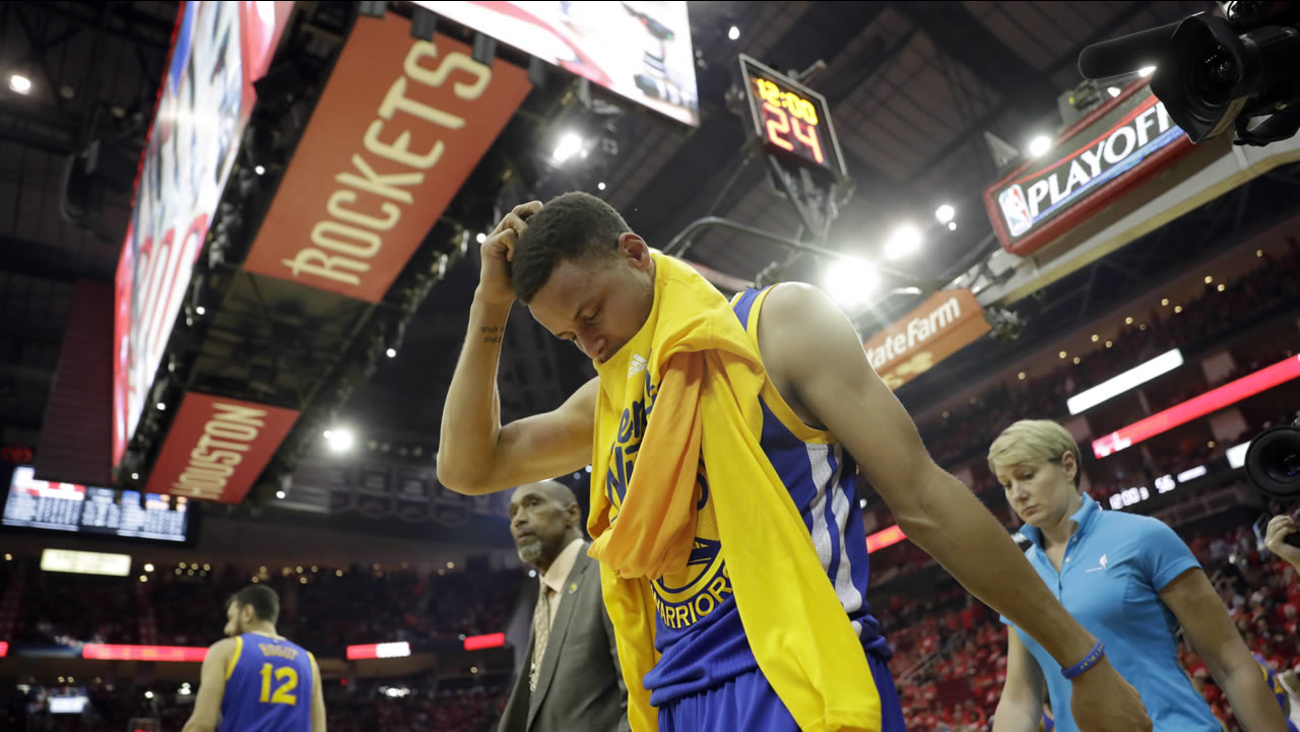 Golden State Warriors' Stephen Curry heads off the court and to the locker room at the start of the second half in Game 4 of a first-round NBA basketball playoff series against the (AP Photo/David J. Phillip)

OAKLAND, Calif. (KGO) -- The result of Golden State Warriors star Steph Curry's MRI reveals that he suffered a sprained knee and will be out for at least two weeks, according to Warriors General Manager Bob Myers. Curry will be re-evaluated in two weeks.

The Warriors tweeted the results after receiving the news.

Curry injured his knee in Sunday's Game 4 of the NBA Playoffs against the Houston Rockets. Late this morning, Curry tweeted that he is doing well.

Thanks 4 all the prayers & messages. Can feel all the positive energy. God is Great! All things considered I’m Gonna be alright! #DubNation

Curry injured his knee after he slipped on a wet spot on the court. His left foot slid awkwardly and then his right knee banged the floor, he immediately rolled and grabbed it in pain. Curry did not play in the second half.

"I thought it looked like an MCL sprain. That he tried to get up and give it a go is a really good sign," said Dr. Brian Feeley with UCSF.

Feeley is a sports orthopedist at UCSF. He says Curry's injury could have been much worse.

"A grade one sprain is the most minor. It means structurally, the MCL is intact but has been stretched a small amount," said Feeley.

Dr. Feeley on #curryknee #curryinjury : "MCL injuries have the best healing potential because they are outside the inside of the knee."

Curry missed only three regular-season games this season; the Warriors were 2-1 in those games. He has played nearly every game the last four seasons, but missed much of 2011-12 with right ankle and foot injuries.

After the game, Curry walked out limping and then joined a circle of friends in prayer. Curry sat out game two and three for an injury to his right foot and ankle. He was able to start Game 4 yesterday and coach Kerr says his foot has recovered, but now the focus switches to his knee.

"He's a tough competitor, obviously concerning because he's our best player. It's extremely difficult without him, he's in our thoughts. He'll be back and if we have to finish out without him on Wednesday, we'll do it. We just have to trust each other," said Warriors Guard Klay Thompson.

"I believe in our team. Coaching staff. I would not count them out," said a confident Warriors General Manager Bob Myers.

Game 5 is Wednesday at Oracle Arena. The Warriors lead the series 3-1.

If Golden State advances past Houston, the Warriors' second-round opponent would be the winner of the first-round series between the Los Angeles Clippers and the Portland Trailblazers.

#curryinjury Dr. Brian Feeley at UCSF describes a grade 1 MCL tear as a 2 week recovery injury. THEN, #curryknee should be at least 80%

Out 2 weeks is about the best #warriors could hope for. Maybe Steph is back for middle of 2nd round. Need to stay afloat til then

Warriors this season without Steph Curry: