While the rest of MLB goes young, the Giants are doubling down on players in their 30s 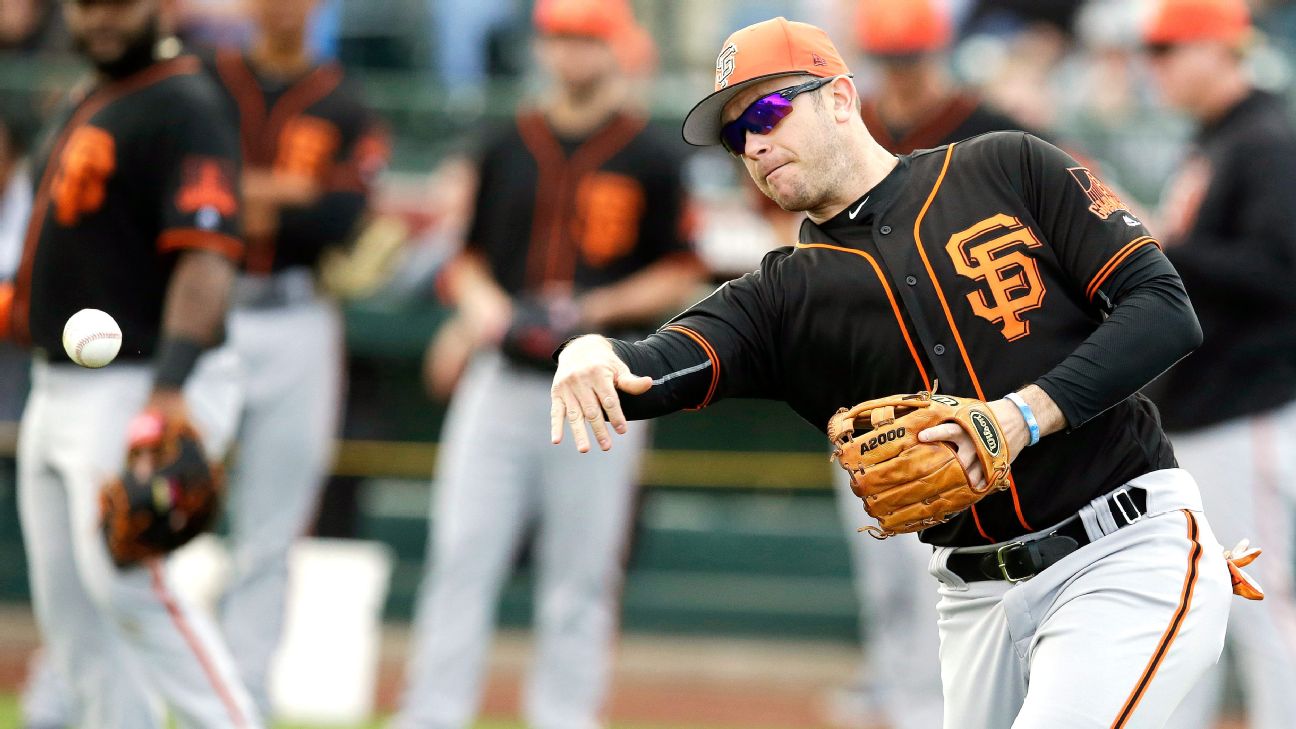 The San Francisco Giants sold out 530 straight games before their streak ended in July, and they feel obliged to put a competitive product on the field for all those die-hard ticket holders by the bay. Even in rough years, the Giants are committed to staying the course rather than selling off big-name assets, punting on contention and pacifying the fan base with prospects and sumptuous garlic fries at AT&T Park.

That approach failed to yield positive results in 2017, when the Giants finished last in the National League West for the first time since 2007. But the players who form the nucleus of the lineup and the heartbeat of the clubhouse are grateful for the opportunity to stay together and have a crack at redemption.

"I'm very happy to be a part of an organization that is doing that,'' catcher Buster Posey said. "I thought about it when the Rays [designated] Corey Dickerson [for assignment] after he hit 27 homers. I'm glad I didn't get drafted by the Rays.''

Posey, Hunter Pence, Brandon Crawford and Brandon Beltwill all be 30 or older this season, and they have dealt with the inevitable speculation about a lost step here or declining bat speed there.

Rather than bringing in an injection of youth to change the mix, the Giants are doubling down on the whole "veteran presence'' narrative this spring.

As a tandem, Longoria and McCutchen have a combined eight All-Star appearances, a Rookie of the Year award, an MVP award, five Silver Sluggers and four Gold Gloves on their résumés. At 32 and 31, respectively, they're also older than Giancarlo Stanton, Christian Yelich, Marcell Ozuna and some other players who caused such a frenzy on the winter trade market.

Both have been through some trying times of late, though. Longoria's .737 OPS last season was the second lowest of his 10 seasons with Tampa Bay. McCutchen overcame a slow start to log a .279/.363/.486 slash line for the Pirates last season but only after enduring a series of indignities. He has been moved out of center field and into right because of declining defensive metrics, and he spent a chunk of his final season in Pittsburgh fending off trade rumors and whispers that his skills had eroded.

McCutchen and Longoria have found a welcoming environment in San Francisco against a tough offseason backdrop as dozens of free agents -- the vast majority of them 30 and older -- have had to scramble for minor league deals or are still unemployed.

"I think it's our job as a group here to go out and prove the value of the veteran player,'' Longoria said. "There are a lot of teams, for whatever reason, who are doing themselves a disservice not signing these guys. It's kind of a shame there are teams consciously making an effort not to improve -- whether it's monetarily or because of controllability or they don't want to sign guys because of age. There are a lot of obvious fits for the free agents out there, and teams aren't going after them.''

The Giants had an average age of 29.6 last season -- fourth highest in baseball behind the Blue Jays, Angels and Mariners -- and that number could increase with the addition of Longoria, McCutchen, Austin Jackson, Gregor Blanco and Tony Watson. San Francisco added five 30-and-older players at a time when agents and players have expressed concern that midlevel veterans in particular are being squeezed by the CBA and the impact of sabermetrics and changing baseball economics.

"I was reading some comments from commissioner [Adam] Silver during the NBA All-Star Game about players coming in younger and putting pressure on older, veteran guys,'' MLB commissioner Rob Manfred said. "There are only so many jobs available, and some of that is at work here. Because we've had a tremendous influx of young talent into our game, some of it is related to analytics. But baseball is such a team game, I think there's always going to be a place for that veteran player who gives you things in the clubhouse that you can't quantify by analytics.''

Many MLB executives have privately expressed skepticism about the staying power of older players now that baseball has tried to eliminate performance-enhancing drugs and amphetamines through stronger testing. Giants' executive vice president of baseball operations Brian Sabean regards that viewpoint as overly simplistic.

"If you look at somebody's résumé and track record, if you're an above-average or good or great player at a young age -- and you're athletic and in the right place at the right time on teams that help you get the best out of your game -- you're probably going to age in a better fashion,'' Sabean said.

"I don't think the industry gives itself enough credit with the initiatives we've taken with sports science, rest and recovery, nutrition, offseason conditioning, in-season conditioning, the new off days built into the schedule and the new ways to travel that are more elite and more first class. You would think we would have the ingenuity of continuing to get more and more out of that player who's getting into X age.''

Longoria showed he still has plenty left in the tank in 2016, when he hit 36 homers and slugged .521 in 160 games, but he slid statistically last season. Some talent evaluators think he'll benefit from getting off the Tropicana Field turf and having the luxury of blending in as a supporting player on a Giants roster that features Posey and Madison Bumgarner as the main attractions. One veteran scout theorized that Longoria, a California native, will be energized by a return to the West Coast and the nightly sellouts at AT&T after years of playing before meager crowds in St. Petersburg, Florida.

Longoria is looking forward to visiting three big league parks -- in San Francisco, San Diego and Atlanta -- where he has yet to play a game. He also has to bone up on a slightly different style of play and the roster machinations he'll encounter in the National League.

"It's something I'll have to get used to, but it's still baseball,'' Longoria said. "We still play three outs and nine innings and there are a lot of similarities. The 7-8-9 spots are usually structured a lot differently, and there are a lot more bunts. I've been confused over double-switches in the past when we played an interleague game. I was like, 'Where is this guy going? I don't know what they're doing.' But that's pretty easy to get used to.''

While Longoria is owed a guaranteed $86 million through 2022, McCutchen has economic motivation to perform well this year. Barring a contract extension with the Giants, he'll hit the free-agent market next winter at age 32.

The NL West will be formidable this season, with the Dodgers, Diamondbacks and Rockies all coming off postseason appearances and the Padres fortified by the addition of Eric Hosmer. As the Giants address their challenges on the field, they'll try to restore some organizational pride and strike a blow for players on the wrong side of a trend.

"Do I think teams are discounting the value of early-30-year-olds? Yes, I do,'' Posey said. "We have kind of an important team here to show the value of it. I think if you're a good baseball player and you dedicate yourself to the game, you still have plenty of value. There shouldn't be guys out there begging for offers who are 31, 32 or 33 years old.''

Not too long ago on the other side of the bay, the Oakland A's made a splash by zigging when other organizations zagged and spawning the concept of Moneyball. Have the Giants found a new market inefficiency to exploit? The results in San Francisco this summer might help provide the answer.
Report a correction or typo
Related topics:
sportsespnbuster poseymadison bumgarnermlbandrew mccutchensan francisco giantsevan longoria
Copyright © 2020 ESPN Internet Ventures. All rights reserved.
More Videos
From CNN Newsource affiliates
TOP STORIES