Why I'll be glad when free agency is over

First of all, congratulations to the Toronto Raptors and Golden State Warriors. One team is going to the NBA Finals (Game 1, ABC, 9 p.m. ET) for the first time, and the other is going for the fifth consecutive time. Franchise history is being made in two very different ways.

Simmering below the surface, however, are the nonstop, underlying narratives about how both teams are going to move forward. At the root of all those stories is free agency.

For the first time, the two best players from the two best teams could be leaving. The pending free agency of Golden State'sKevin Duranthas been a hot topic for months. And many people believe there's at least a 50 percent chance Kawhi Leonard, also a free agent, could leave Toronto.

And that's why I'll be so glad when free agency is over. It's tough on the fans, some of whom are in constant fear of the unknown. It's tough on players, who are pulled in so many directions. And it's tough on analysts, who are forced to talk about hypotheticals instead of actual basketball.

In the past year since I retired from playing in the NBA, I've been so fortunate to do what I love -- talk about basketball -- as an analyst for ESPN, Pac-12 Network and CBS Sports. People often ask me, "How is retirement?" This always makes me laugh because I feel like I'm working harder now than I did in my last season of playing basketball.

As a rookie on this side of the desk, the most eye-opening thing has been seeing how difficult free agency is for fans, players and franchises. I watch as they endure a roller coaster of emotions. Will their favorite player leave? Will a favorite player come back? Will they have a chance to win a championship?

Fueled by the 24-hour news cycle, topics are covered months -- sometimes years -- in advance. Recently, when the New Orleans Pelicans won the NBA draft lottery, a secondary conversation started to brew: What if consensus top pick Zion Williamson didn't want to go to New Orleans? Now think for a minute what that does to a fan base. Think about the implications for an organization. Think about what happened when the Pelicans' best player, Anthony Davis, a former No. 1 pick, requested a trade midseason. That alone sent the fan base and organization into a tailspin. And then we couldn't even let Pelicans be excited about the No. 1 pick and the future of the franchise without treating Williamson like ... well, a free agent.

Fortunately, this story didn't catch much fire, but it makes you wonder about the responsibility that we in the media have in covering this sport.

As a former NBA player who knows a lot of these guys personally, I empathize with what the players go through. People often describe players as sensitive or emotional. I don't think that's true. I think players are human. No amount of money can change the fact that these people -- often kids in their early 20s -- are human. When they go from city to city, it can be difficult to face a constant barrage of questions about what they're going to do for the next couple of years.

Imagine how hard it must be to do your job and have the weight of multiple cities and fan bases pulling at you. Not to mention the weight of the franchise that you're trying to carry and play for pulling you in another direction. That could stress somebody out. It stresses me out just covering it. (And, yes, they are lucky to get to do their dream job. As am I.)

People have told me I talk too much about my 2016 championship season with the Cavaliers. Well, that's because people always ask me to talk about 2016 ... and I gladly oblige. Someone recently asked when I will turn into a "Back in My Day" guy. I had to pause to think about what that even means. So here it is: Back in my day, free agency wasn't a yearlong situation. It wasn't something that was talked about two years in advance. It was talked about for maybe a couple of months, total. And, yes, I blame LeBron Jamesbecause of The Decision. (He knows it's all his fault. He'll tell you. Just ask him.)

I know it's cyclical. Every two years or so this might happen. I also know that talking about this stuff is what I get paid to do and what I love to do. But for the fans' sake, I can't wait until these players find their homes so we can talk about their performances instead of what team they might join and how they might pair up with any number of other guys. That's what I'm most excited about for next year, and why I'll be so happy when this free-agency period ends, because maybe, finally, we'll just get to talk about basketball.

Because back in my day, that's the way it used to be. 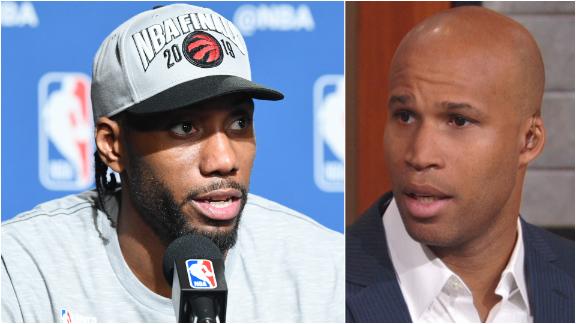