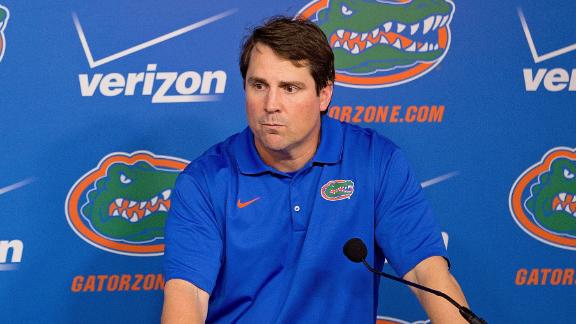 GAINESVILLE, Fla. -- As criticism has mounted, Floridacoach Will Muschamp says he's taking a "bunker mentality" these days. The fourth-year coach has come under fire from fans in recent weeks, and some of their barbs have hit close to home.

"Well, you've got to get home and explain to your 9-year-old why they're chanting to fire your dad," Muschamp said Monday. "That's not very fun."

The Gators have lost 10 of their past 13 games, including a 42-13 shellacking in their homecoming game against Missourion Oct. 18 that saw fans chant "Fire Muschamp" in the third quarter before leaving the stadium in droves. Fans also booed starting quarterback Jeff Driskel on several occasions.

"I told the team after the game, I said, 'As a fan, you buy a ticket, they reserve the right to boo. They buy the ticket, they can come boo and chant and holler and scream and start a website and all that stuff,'" Muschamp said. "As a coach or a player, when you come to the University of Florida or a place like this, that's something you've got to accept."

Since the Missouri game there has been widespread speculation that Muschamp will be fired. His players, however, are standing by their coach.

"We can't worry about his future or what we've got going on and how that connects to us," senior linebacker Michael Taylor said Monday. "We're just going to go out there and play. We love playing for him. He's a good coach. He's a great person.

"I wouldn't want to play for anybody else right now. That's just how I feel about it, and I'm pretty sure every other player in the locker room feels that way. So we're not really playing for his job. We're playing for ourselves. We have enough motivation."

Muschamp announced last week that the Gators will start true freshman Treon Harris at quarterback, replacing Driskel. On Monday, Muschamp gave his most stern criticism of Driskel, a fourth-year junior who has 12 turnovers in his past 14 quarters.

"For whatever reason we have lost some confidence, whether it's dropped passes, whether it's timing, whether it's forced throws," Muschamp said. "And we've had way too much inconsistency as far as our ball security at the quarterback position, and turnovers. And that's why we're going with Treon."

Heading into a Georgia game that many view as critically important in deciding Muschamp's future, Florida is 2-8 in its past 10 SEC games. Throughout last season, when Muschamp's Gators went 4-8, and into this season, UF athletic director Jeremy Foley has issued several statements supporting his coach. In his most recent statement one week ago, Foley said Muschamp will be evaluated as the season plays out.

"As a football coach it's a bunker mentality," Muschamp said. "It is what it is. It's what you deal with when you get in this profession."