Will Muschamp: I want to coach 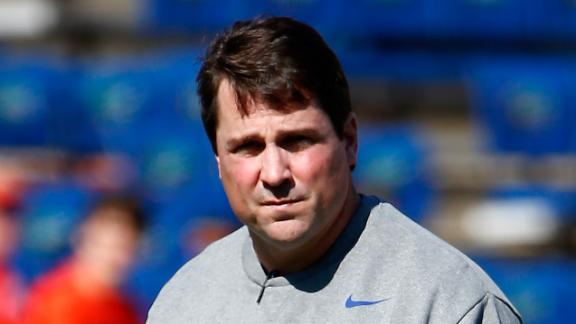 GAINESVILLE, Fla. -- Will Muschamp wants to coach next season.

TheFloridacoach said Wednesday he would "like to obviously be working next year."

Florida parted ways with Muschamp on Sunday, less than 24 hours after the team's sixth loss in its past eight home games.

Gamecocks coach Steve Spurrier declined comment when asked specifically whether he would hire Muschamp. But Spurrier does believe that Muschamp will land somewhere.

"If he wants to coach again next year, I'm sure a lot of people will be after him," Spurrier said.

Under Muschamp's guidance, the Gators ranked eighth in total defense in 2011, fifth in 2012 and eighth last year. They rank 20th this season. He had similar success on that side of the ball atLSU, Auburn and Texas.

Muschamp will coach Florida's final two regular-season games -- against Eastern Kentucky and Florida State -- before deciding what the future holds.

"I'm looking forward to that next step, but what that will be I have no idea," Muschamp said. "I haven't put any thought into that as far as where, what, when and how. I don't know all those things. Certainly, right now, my focus is on this team and getting us ready for these next two games."

Florida is 27-20 under Muschamp, including 17-15 in Southeastern Conference play.

"I don't care what's happened to Will and his circumstances, he did a really good job in my opinion in making that program better, did a great job of recruiting, was a great competitor out there in recruiting, and I think he really did a really good job in coaching the team," saidAlabamacoach Nick Saban, who hired Muschamp as an assistant at LSU and with the NFL'sMiami Dolphins. "There were just some parts of the team that never did as well as people's expectations, and that's the business that we're in.

Muschamp also weighed in on defensive end Dante Fowler Jr., who posted on his Twitter page Tuesday that he's leaving school after his junior season and entering the NFL draft.

"He's got a tremendous upside, in my opinion," Muschamp said. "The No. 1 thing that Dante's got going for him, and there are a lot of things he has going for him, is how hard he plays. And that's what they want to see. Football's very important to Dante. Your tape is your rsum as a player, and his rsum is very good because of the effort that he gives."

Fowler has been one of Florida's best defenders for three years. He leads the team this season with 4.5 sacks, 10 tackles for loss and 15 quarterback hurries. He is third on the team with 49 tackles.

"On top of that the physical attributes he has, as far as his initial quickness, his power, he's very smart, he can handle multiple stuff as far as the different things you game-plan with him -- changing week to week and getting him in different spots," Muschamp said. "He's got a tremendous upside in front of him, and somebody's going to be very lucky to have him."