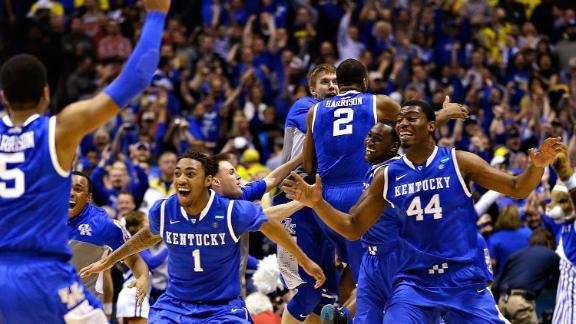 Asked about Cauley-Stein's status on an NCAA conference call, Calipari said, "I doubt he plays. He will be on our bench, cheering like crazy."

Cauley-Stein injured his ankle during the first half of the Wildcats' Sweet 16 win against Louisville. He did not play in Kentucky's Elite Eight win over Michigan.

The sophomore big man was averaging 7.0 points, 6.2 rebounds and 2.9 blocks this season.

Calipari likely will turn again to Marcus Lee in the national semifinal game against Wisconsin on Saturday. Lee, a McDonald's All-American who logged mostly bench minutes for Kentucky this season, scored 10 points, pulled down eight rebounds and blocked two shots in 15 critical minutes against Michigan.

Calipari: Cauley-Stein Doubtful
Dana O'Neil discusses comments by Kentucky coach John Calipari, who indicated that Willie Cauley-Stein, who injured an ankle in a Sweet 16 win over Louisville, is unlikely to play in the Final Four.