Willie Cauley-Stein hints at NBA: 'It's time to take another step' 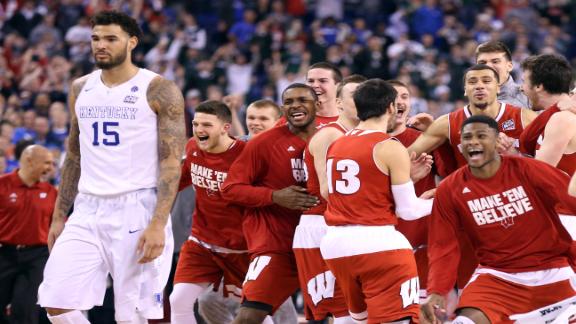 Kentucky Wildcats junior forward Willie Cauley-Stein hasn't yet officially committed to making the jump to the NBA, but it sure sounds as if he's leaning that way.

"It's time to take another step," Cauley-Stein told reporters after the Wildcats' 71-64 loss to Wisconsin in the national semifinal. "I mean, obviously, I'm not 100 percent on it, but I'm pretty sure I know what I want to do. Gotta talk to a couple more people, but probably was my last game here."


The 7-footer, who averaged 9.3 points and 6.4 rebounds this season, is projected as a lottery pick and is ranked as the eighth-best NBA draft prospect by ESPN NBA Insider Chad Ford.


He finished with just two points, five rebounds and two blocks in the Wildcats' loss to the Badgers on Saturday night.


"That's going to probably eat at me for the rest of my life, just knowing I had so much more that I could've given and changed the outcome of the game," Cauley-Stein told reporters. "But I just didn't do it. That's really going to kill me on the inside."


Other Kentucky players still to make a decision as to their future are freshmen Karl-Anthony Towns, Devin Booker, Trey Lyles and sophomores Andrew Harrison, Aaron Harrison and Dakari Johnson.


The 6-11 Towns, who had 16 points and nine rebounds against the Badgers, is ranked No. 1 on Ford's NBA draft prospect rankings.

No perfect season
Dick Vitale, Jay Williams, Rece Davis and John Anderson break down Kentucky falling to Wisconsin in the Final Four and suffering its first loss of the season.