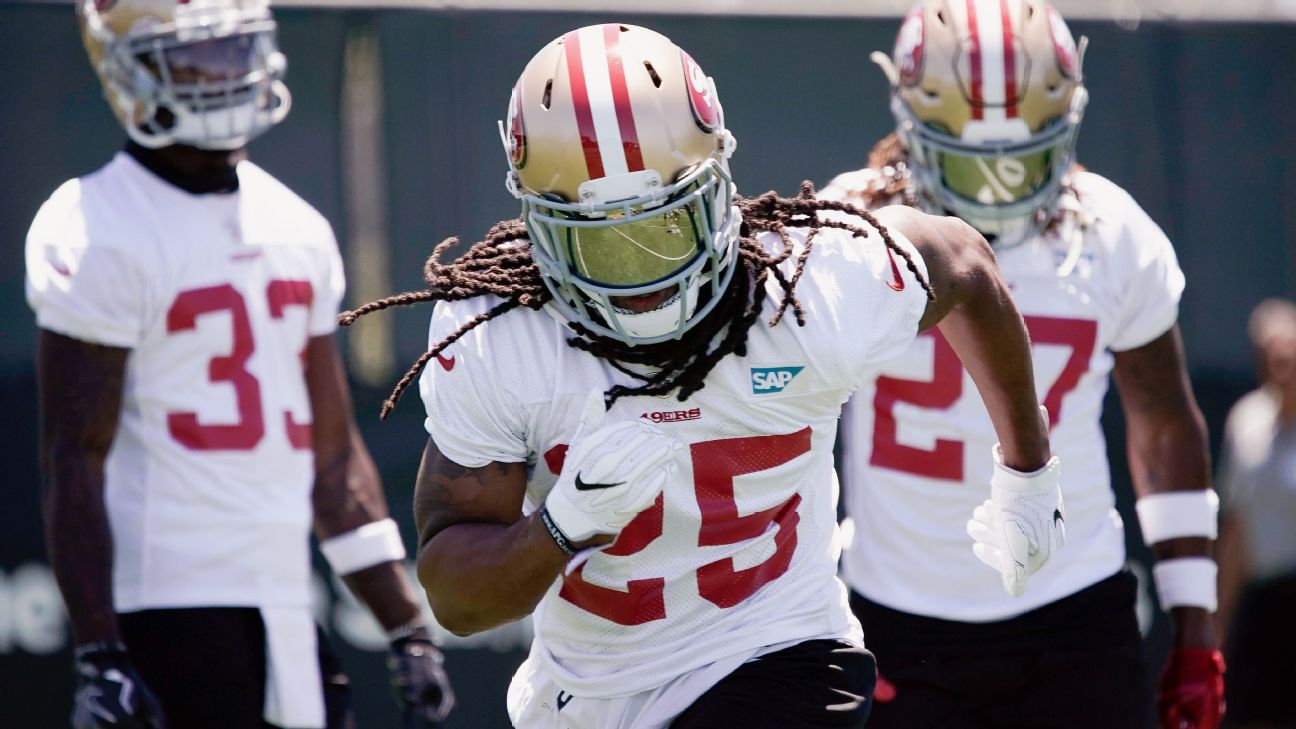 SANTA CLARA, Calif. -- In sticking to the plan the San Francisco 49ers and cornerback Richard Sherman set forth from the moment he signed with his former arch-rival, Sherman will be back on the field and participating when the Niners open training camp on Thursday.

Upon reporting for camp and speaking to the media Wednesday, Sherman said he is "100 percent" healthy after a lengthy rehabilitation from a ruptured right Achilles suffered on Nov. 9 of last season. Sherman also was working through a more minor surgery to his left heel, a procedure that took place earlier this year.

For Sherman, it was a long road back but one he seemed to embrace.

"So that's the way I treated it every day, as another step. Obviously, there are always setbacks both mentally and physically and emotionally, but it's one of those things where you allow yourself to see what you're really made of when you go through things like this. And I appreciated that journey."

As a reward for Sherman passing his physical and avoiding landing on the physically unable to perform list to open camp, he received a $2 million bonus that was written into the contract he signed with the 49ers in March.

San Francisco coach Kyle Shanahan said that while Sherman is "good to go," the Niners will be cautious in their approach to plugging him all the way back into the mix. For now, Sherman will practice two days in a row, followed by a day off, followed by another practice and then the required day off on the fifth day that the whole team gets. From there, the Niners will re-evaluate where Sherman is based on how he's feeling and tweak the plan as necessary. But all of that will be done with an eye toward having him ready for the regular-season opener on Sept. 9 against the Minnesota Vikings.

"I just want to see him get comfortable," Shanahan said. "It's different with Richard. There's lots of guys on our team we're real excited about and we think have a chance at a real good future and some guys who have had some success. But Richard is one of our few guys who has done it for a longer time. We've all played against him, we know what Richard is. Richard is also a guy, I think, we trust how he thinks, how he works. We know it's as important to him to get out there as anyone in this world. So he's someone we are going to communicate to a lot.

"A lot of it is up to Richard. We have got to be careful. We have got to be sure if Richard is being a little too aggressive, it's our job to pull him back a little bit. But we have got to communicate the right way because, really, all I care about Richard is him getting himself back to being Richard Sherman by Week 1. And if he can't do it by then, just be honest with us, because it's a matter of time when he gets back. We just want to make sure we're smart with that and don't have a setback."

Although Sherman acknowledged the difficulty of his recovery, he also pointed to some positives of facing a challenge unlike any he'd seen in his career. Sherman said he spoke to former NBA superstar Kobe Bryant soon after the injury and got advice from the legendary Los Angeles Laker on recovering from an Achilles injury.

Sherman also said he got much-needed boosts from his children along the way in addition to the extra time he got to spend with them while he was away from the game.

In the spring, Sherman was able to participate in organized team activities and minicamp practices on a limited basis, but both he and the Niners eyed the start of training camp for his targeted return.

"The outside world has their [thing], make headlines one way or the other," Sherman said. "'He's not going to be ready for these reasons, he's going to be ready for these reasons.' But I never had any doubt. My body was recovering and healing at the rate that they wanted it to heal and working with our strength and conditioning coach, Ray Wright, and getting all of those workouts in was incredibly beneficial and doing the conditioning test and things like that -- that helped me get my wind back."

When Sherman gets back on the field, he'll have to contend with new rules regarding helmet-to-helmet hits, a change the veteran cornerback is not a fan of.