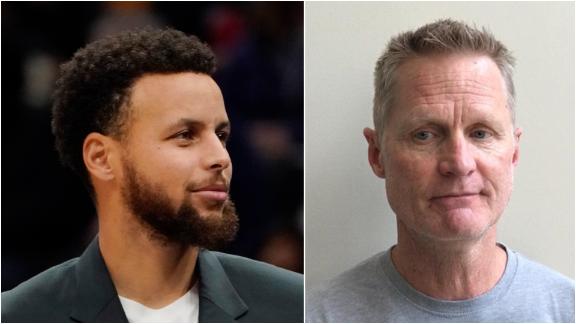 Fans who bought tickets for Sunday's Golden State Warriors home game hoping to see Stephen Curry's return to the court will have to settle for a visit from red-hot scorer Bradley Beal when the Washington Wizards visit San Francisco.

Curry, who broke his hand in the Warriors' fourth game of the season in October, had been pointing to March 1 for his comeback.

So the two-time NBA Most Valuable Player will be sent to Santa Cruz, Calif., on Monday to scrimmage with the Warriors' G League affiliate in hopes he can pass a final test before probably returning Thursday against Toronto.

"He put up a little bit of a fight, but also understood why we wanted to take extra precaution," Kerr said before Saturday's 115-99 win at Phoenix, a game in which Golden State had only eight players available.

The Warriors beat the Wizards 125-117 in Washington on Feb. 3, but did so in large part thanks to a combined 52-point contribution from Alec Burks and Glenn Robinson III, who are no longer with the team.

In their place, the Warriors have added Dragan Bender and Mychal Mulder on 10-day contracts, and both made significant contributions to the win at Phoenix that snapped an eight-game losing streak.

Bender, in his first game in Phoenix after leaving as a free agent last July, contributed 13 points, nine rebounds, four assists and three blocks to the win.

Mulder, in just his second game for the Warriors, came off the bench to hit three 3-pointers en route to 14 points to go with six rebounds.

The Wizards began a four-game Western swing with a 129-119 loss at Utah on Friday, the fourth loss in their last five games.

They'll take the court in San Francisco with team and individual goals in mind.

The team hopes to avenge the earlier loss to Golden State, after which Wizards coach Scott Brooks insisted to reporters, "We did not come out to play with the right mindset. I don't know what we were thinking, but we weren't thinking the right things."

And then there's Beal, whose 42 points went for naught at Utah in the trip opener.

He has scored 25 or more points in 17 consecutive games, tying the franchise record set by Walt Bellamy in 1962.

Beal led the NBA in scoring in February with 36.2 points per game.