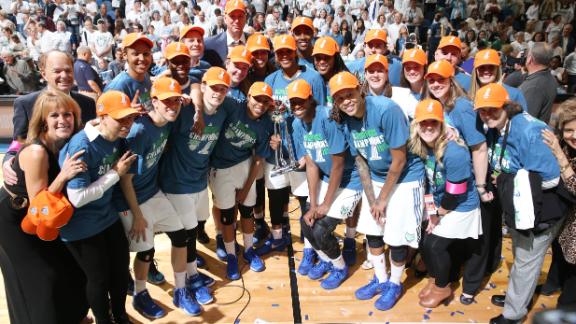 ESPN
By Mechelle Voepel
The WNBA will welcome its 20th season with a major change to the postseason that also affects the setup of the regular-season schedule.

The playoffs will no longer be divided into the Eastern and Western conferences. Instead, the top eight teams by winning percentage will make the playoffs and will be seeded 1 through 8 by record, the league announced in revealing the new format Thursday.

The top two seeds get an automatic bye into the semifinals, which now, like the WNBA Finals, will be in a best-of-five format.

"There's a sense of urgency that the players and fans and TV will have," Washington Mystics coach Mike Thibault said. "It adds a little more spice to it."

In the semifinals, the No. 1 seed will host the lowest remaining seed. The semis and the WNBA Finals will be in a 2-2-1 format, with the top seed hosting Games 1, 2 and 5 (if necessary).

The reconfigured postseason structure, featuring live telecasts by ESPN networks of every playoff and Finals game in 2016, dovetails with a new, more balanced format for the regular season featuring more games between the conferences, which each have six teams.

Each team's in-conference schedule will consist of four games against one team and three games apiece against the four other opponents. The opponent breakdown will be randomly selected and then rotated each season to ensure balance.

"First and foremost, the new postseason format provides an enhanced opportunity to showcase the best teams in the WNBA Finals," NBA deputy commissioner and chief operating officer Mark Tatum said in a statement. "Coupled with the new regular season structure that creates more competitive balance and additional excitement during the stretch run toward the playoffs, the new postseason format will provide a heightened sense of urgency to the start of the postseason."

When the WNBA launched in 1997 with eight teams, the entire playoffs were single-elimination games between the top four seeds by record. In 1998, two West teams -- Houston and Phoenix -- met in a three-game WNBA Finals. Since then, the playoffs had been divided by conference until the Finals.

The WNBA's 20th season comes in an Olympic year, which means the league tips off in May and will have a break for the Summer Games in Rio de Janeiro, Brazil. The regular-season schedule is expected to be released soon.

In February, NBA commissioner Adam Silver said he is open to revamping his league's playoff structure by eliminating conference seeding and instead going with the NBA's 16 best teams.Silver has expressed concern about the amount of travel for players.