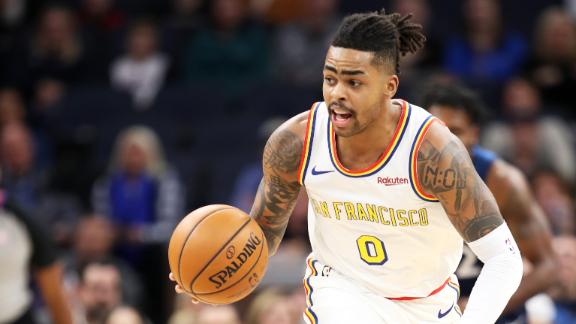 Russell and the Warriors led 110-106 with 29 seconds left in regulation. But after two free throws by Karl-Anthony Towns and a forced jump ball by Robert Covington, Wiggins tied it on a drive with 5.6 seconds left. Russell's 3-pointer at the buzzer missed.

In overtime, Wiggins hit a clinching 3 with 23 seconds left to help the Timberwolves snap a two-game losing streak.

Towns battled through foul trouble to score 20 points and grab 14 rebounds. Covington had 17 points and 11 rebounds.

Alec Burks scored 18 points off the bench for the Warriors. They have lost five of six.

Russell had missed the previous three games for injury-depleted Golden State with a sprained right ankle. His return gave the Warriors their seventh different starting lineup in nine games. His previous career high was 44 points.

Three fouls limited Towns to seven points on five shots in 10 first-half minutes. That, along with 17 points from Russell, helped the Warriors to a 61-60 lead at halftime.

Golden State was 20-for-20 from the free-throw line in the first half. The Warriors finished the game 23 for 24.