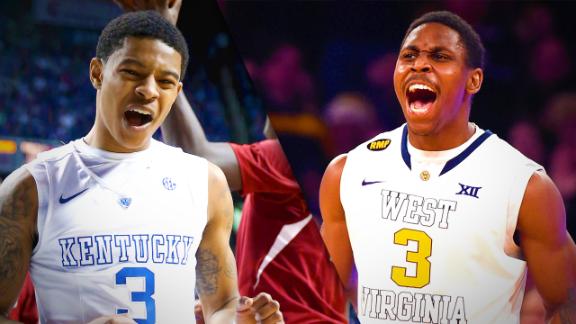 CLEVELAND -- The 36-0Kentucky Wildcatsmay be the best college basketball team in the country -- and just four games away from a historic 40-0 finish -- but No. 5-seeded Sweet 16 opponentWest Virginiahas them beat in atleastone category:

"I give them their props," West Virginia freshman guard Daxter Miles Jr.told reporters Wednesday. "Salute them to getting to 36-0. But tomorrow they're gonna be 36-1."

Miles said the Wildcats "don't play hard," and should fear the Mountaineers -- not the other way around.

"They should be more intimidated," Miles said. "Because they're the ones who have the high standard, and we're coming for them."

Miles also predicted UK wouldn't be able to pass the ball against the Mountaineers' vaunted press, which will enter Thursday's Midwest Regional semifinal forcing opponents into turnovers on 28.3 percent of possessions, the highest mark in the country. When asked whether the Mountaineers' uptempo defense would work against unbeaten Kentucky, guardJuwan Statenresponded with a question of his own.

"Why wouldn't it?" Staten said. "We've been playing this way all year, we've had success against everybody no matter what style or what type of players they have. That's the only way we play and it's just up to us to make it work."

"I don't know," Huggins said, when asked if the press would disrupt Kentucky's offense. "I hope so. It's going to be a long day for us if we can't."

"That's good," Cauley-Stein said. "It adds fuel to the fire."