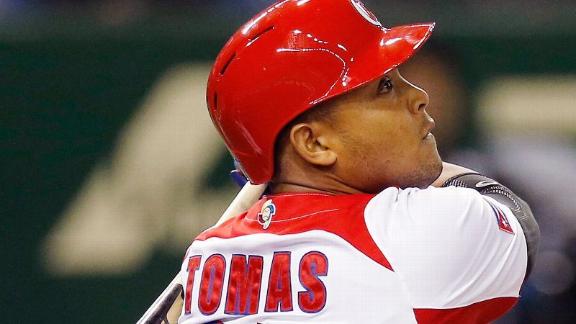 The 23-year-old Tomas, a 6-foot-1, 230-pound right-handed power hitter who plays the corner-outfield spots, has been playing for Havana powerhouse Industriales since 2008 and was part of Cuba's national team at the World Baseball Classic last year.

News of Tomas' defection came in a single paragraph at the end of an article in Communist Party newspaper Granma, which interviewed national baseball director Higinio Velez Carrion about two games next month against a visiting U.S. collegian team.

"From the same source, Granma learned of the departure from the country, through unscrupulous, illegal human trafficking, of he who was a player for the Industriales team, Yasmani Tomas," the article read.

Tomas went 6-for-16 during the WBC with two homers, one double and four strikeouts.

According to official statistics, Tomas hit .275 for Industriales last season with 10 home runs and 59 RBIs in the 90-game regular season and seven playoff games.

He dipped to six home runs while hitting .290 in 257 plate appearances for Industriales this season, but a source told Baseball America that may have been because of an arm injury suffered while crashing into an outfield wall.

A number of Cuban baseball players -- including Yasiel Puig (Dodgers), Jose Abreu (White Sox) and Yoenis Cespedes (Athletics) -- have defected over the years, tempted by the prospect of multimillion-dollar contracts with Major League Baseball clubs.

Cespedes got a $32 million deal with the A's. Puig signed with the Dodgers for $42 million, and Abreu landed a $68 million contract with the White Sox.

With the full blessing of island authorities, stars Yulieski Gourriel and Frederich Cepeda have signed deals worth a reported $980,000 and $1.5 million, respectively, to play in Japan during the Cuban baseball league's summer-fall offseason.