Year after embarrassing loss, UCLA dominates No. 1 Kentucky in rematch 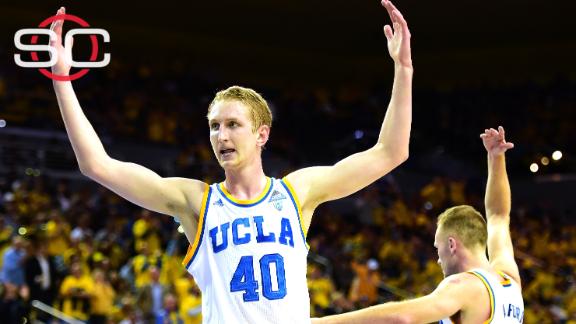 LOS ANGELES -- Steve Alford barely mentioned last year's 83-44 drubbing by Kentucky and showed no video of it in preparing UCLA for the rematch.

The memory was already seared in the minds of the players who endured the humiliation.

Alford's main message was a boxing analogy: "If you want to play it, we got to come to fight."

The Bruins came out punching and landed a knockout blow, upsetting the Wildcats 87-77 on Thursday night for their first victory over a No. 1 team since 2003.

"This win is very, very special just because of what happened last year," Alford said. "Not only were they the No. 1 team in the country, we had seven points in the (first) half last year." Kentucky led 41-7 at halftime in that game.

Bryce Alford and Isaac Hamilton added 15 points each, Tony Parker had 11 and Aaron Holidayhad 10 for the Bruins (5-3), who led all but 30 seconds of the game and shot 53 percent from the field.

"We knew nobody in the world thought we were going to win this game," Bryce Alford said. "I heard a lot this week about trying to keep it competitive, and so I'm glad we did that."

Some fans dashed onto the court to celebrate at the buzzer, but the majority were held back by security.

"The fans were absolutely incredible, and we couldn't have won without them," Bryce Alford said.

The Wildcats had five players in foul trouble, including Alex Poythress, who fouled out with four points with under 10 minutes left. They lost a regular-season game for the first time since March 8, 2014, at Florida.

Kentucky shot its worst of the season at 38 percent and never made a big run.The Wildcats scored a season-low 28 paint points and struggled with their outside shooting, hitting just 26.8 percent on shots outside the paint.

"Playing at Kentucky, that's what you get. We get the other team's best," Wildcats coach John Calipari said. "We walk into another team's arena, it's the best crowd in the world. We did not meet that challenge. Neither did I as a coach. I thought we were more prepared than we were, and we weren't."

The result was a dramatic turnaround from last December, when the Wildcats opened the game in Chicago with a 24-0 run and led 41-7 at halftime.

This time, the Bruins dominated from the start, going on a 9-0 run after Kentucky scored the game's first basket. They ran off 10 straight points later in the half, when the Bruins shot 50 percent and led by 11.

UCLA opened the second half with a 17-10 spurt to build its largest lead of 15. Welsh and Parker, who both had two points in the first half, scored six points each.

"We can't just win off talent," Kentucky guard Tyler Ulis said. "Taking one early is going to help this team because sometimes we come out and we're not playing too hard. The guys are going to know we can lose. Nobody wants to have this feeling again."

The Wildcats couldn't get their offense in gear, appearing to try to do too much in a desperate bid to reduce their double-digit deficit. They got within single digits just once -- early in the second half. Willis' three-point play got them to 67-57 before consecutive baskets by Hamilton and Welsh pushed UCLA's lead to 71-57.

Calipari is the first coach in college basketball history to amass four November and December losses as the AP's top-ranked team.

The Wildcats lost starting forward Marcus Lee, who suffered a head injury in the first half and didn't return.

"It must have been a pretty good blow," Calipari said.

The Bruins led 37-29 at halftime after holding the Wildcats to their worst first-half shooting percentage (37.5) of the season. Kentucky missed 10 of its last 13 shots.

Skal Labissiere's lone basket of the half left Kentucky trailing 22-21. The Bruins closed the half on a 17-8 run, including 10 straight that produced their largest lead of 11.

Kentucky: It was the Wildcats' first visit to Pauley Pavilion. Kentucky played UCLA in L.A. in 1951 and '61 before Pauley was built. ... The Wildcats are No. 2 behind UCLA with eight national titles. ... They lost to UCLA for the first time since the 2006 Maui Invitational. ... They still lead the all-time series 7-5.

UCLA: Hall of Famers Jerry West and Oscar Robertson sat together... Shaquille O'Neal was on hand. ... The arena's seats were covered with gold T-shirts proclaiming UCLA's record 11 national championships, the last of which they won 20 years ago. ... As part of the home-and-home series, the Bruins will play for the first time at Rupp Arena next December. ... Thursday marked the 50th anniversary of the first official game at Pauley, with the Bruins beating Ohio State 92-66. Mike Warren, who played in that game, served as honorary captain Thursday. ... Other Bruins greats on hand were Jamaal Wilkes, Baron Davis, Toby Bailey and Luc Mbah a Moute, and on the women's side Ann Meyers-Drysdale and Denise Curry.

FLYING IN THE LANE

UCLA freshman Prince Ali came flying through the lane and dunked one-handed in the second half, drawing a foul and completing a three-point play.

"I try to look at Prince, and Baron Davis is in the background going absolutely nuts," Bryce Alford said.

Holiday added, "That gave us a lot of energy, the crowd got into it."

Ulis was playing for the first time since last Friday, when he left a game against South Florida with a hyper-extended right elbow. He didn't play in Monday's 12-point win over Illinois State.

"It hurts. It doesn't really matter," he said. "I tried to come out and play, give it my all."

He finished with nine points and a game-high nine assists.

The Associated Press and ESPN Stats & Information contributed to this report. 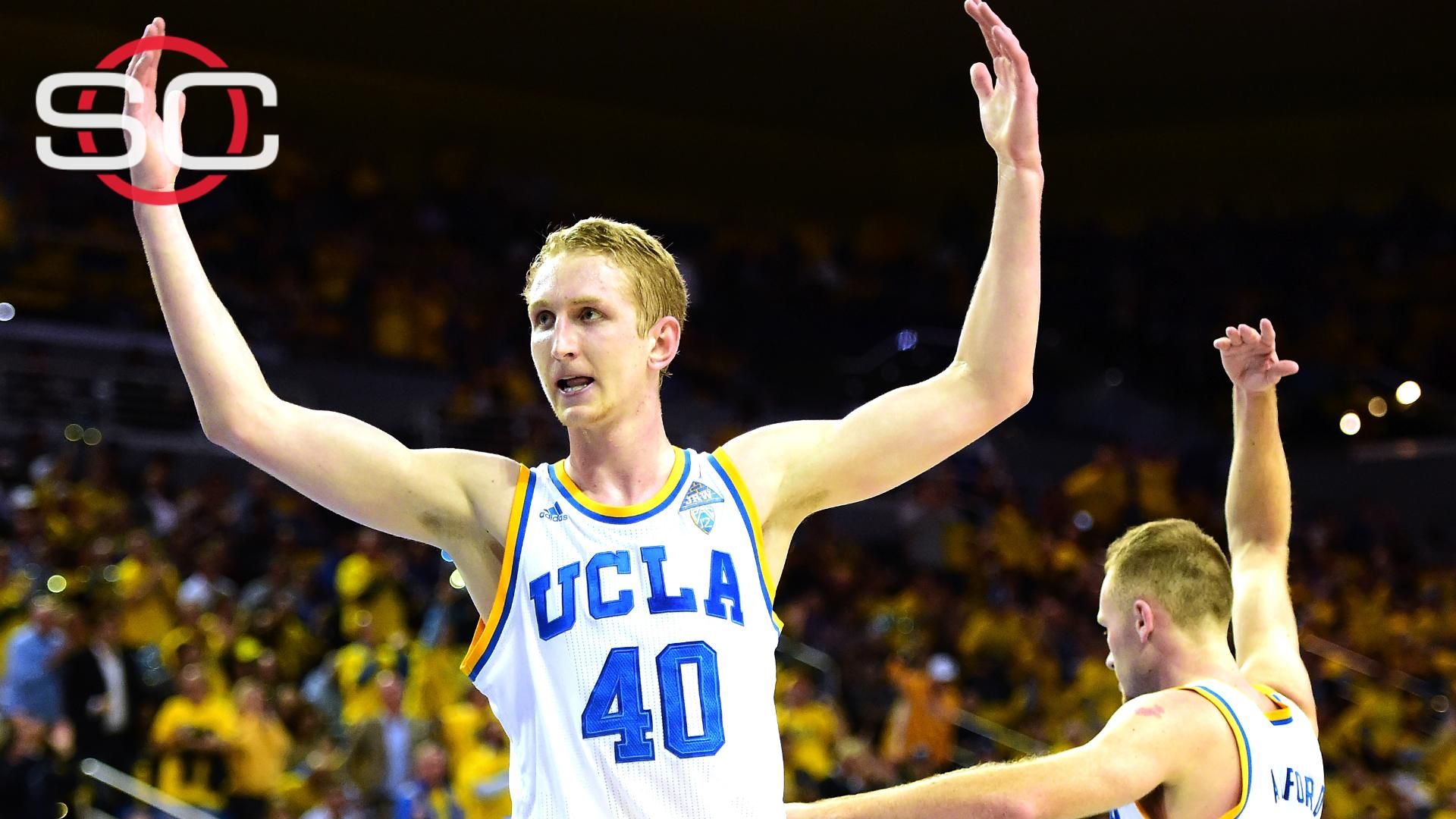 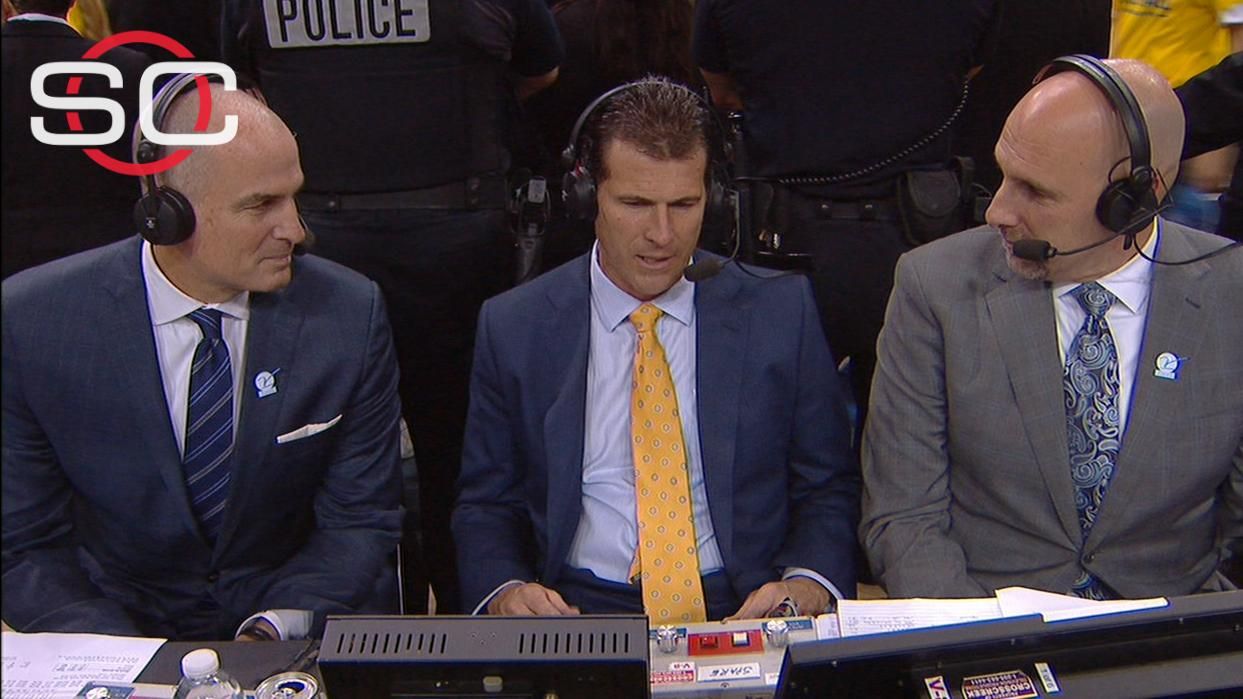