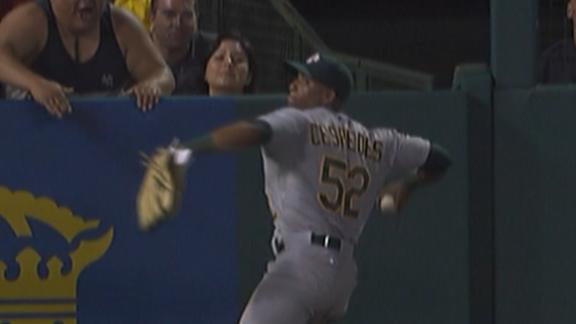 Yoenis Cespedes did it again from the left-field corner Wednesday night, throwing out Albert Pujols at third base after misplaying a drive down the line.

Cespedes cut down Pujols in the sixth inning of a 7-1 win in Anaheim as the slugger was trying to stretch a double with the A's up 4-1.

Pujols' sharply hit ball off A's starter Tommy Milone bounced twice before it hit the outfield wall to the left of the foul stripe and, before Cespedes could corral it, rolled toward center field along the warning track.

Cespedes eventually caught up to the ball, grabbed it, turned and fired to Josh Donaldson. The A's third baseman was forced to dive toward second base while still able to pick it and apply the tag as Pujols began a headfirst slide.

"I think Cespy's starting to do that on purpose," Milone said, according to the Bay Area News Group. "Bait them, then throw them out."

The sequence came a night after Cespedes made a similarly impressive play on a Mike Trout liner, throwing out Howie Kendrick at the plate from about 20 to 30 feet from the spot he threw out Pujols.

On Tuesday night, his throw to the plate preserved a 1-1 tie in the eighth of a game the A's lost in 14 innings.

"He's got a few assists this year," A's manager Bob Melvin said of Cespedes, who leads the majors in outfield assists with nine. "That was a tough throw he had to make tonight, and I'm sure that's why Albert tried to run on him there. ...

"Throwing it right on the money from a long way away on the fly was the only way he was going to get him, and he did it again. He never ceases to amaze."

The Angels quickly weighed in via Twitter after Wednesday night's throw:

Cespedes, I thought we discussed this already...

- Los Angeles Angels (@Angels) June 12, 2014Cespedes stepped up with his bat, too, bookending Oakland's run production with RBI singles in the third and ninth innings. He also doubled and scored in the sixth.

Trout's catch over the wall in center field robbed Cespedes of a home run to end the first.

Cespedes Does It Again
For the second straight night, A's outfielder Yoenis Cespedes bobbled the baseball, recovered and threw out an Angel on the basepaths.

A's Win To Avoid Sweep
Yoenis Cespedes threw out Albert Pujols at third in the A's 7-1 over the Angels.