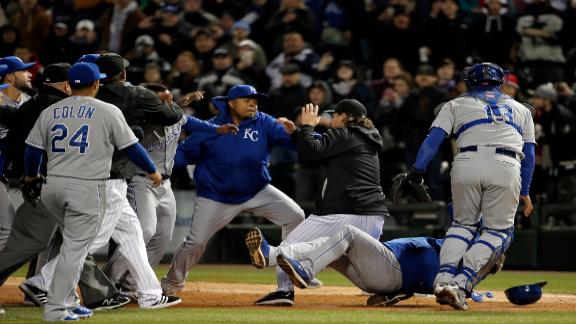 CHICAGO -- A wild seventh-inning fight between the Chicago White Sox and Kansas City Royals on Thursday started near the first-base foul line, ranged out toward second base and resumed again near the first-base bag, ending with the ejection of five players, including both starting pitchers.

But things didn't get ugly until Adam Eaton hit a comebacker at Ventura in the seventh inning. Television replays appeared to show that Ventura barked an expletive at Eaton before throwing to first base for the out.

"[Ventura] kind of, you can watch the video, but I think when he came at me with the two-step that he did, and then he said something, I was a little thrown back by it," Eaton said. "And then I had some words for him. ... He's a heck of a competitor, a heck of a pitcher. He wouldn't be where he is if he wasn't that way. I'm the same way.

"It was a messy situation. I got the ground ball and was unable to control my emotions in that play, and it turned out ugly," Ventura said.

"[Eaton] said something to me. I responded back to him," he said. "It wasn't my intention, but maybe he interpreted it from the way I fielded the ball. But it was a hard comebacker, kind of put me off-balance, at which point I took those steps that incited him and he responded back, clearly emotional. If there wasn't the yelling between us, it would have resolved much more favorably, and not the way that it did."

Both Eaton and Ventura quickly were restrained by umpires, but once both teams gathered on the infield, punches began flying. Jeff Samardzija lost his footing at one point in the fracas, with a dogpile quickly forming near the first-base bag.

The White Sox sawSale and Samardzija get tossed, while the Royals lost Ventura,Lorenzo Cainand Edinson Volquez.

"What happened, two competitive teams scratching for the same goal," Eaton said. "Ventura is a heck of a competitor. I respect the heck out of him and everyone behind him. I'm a competitor as well. Sometimes boys will be boys, and I think that was a situation where we had some excitement."

Eric Hosmer's go-ahead double in the 13th gave the Royals a 3-2 win. It's their fourth win in their past five games.

When the two teams met at Kansas City to open the season, the Royals came away with an easy three-game sweep. In the process, though, six batters were hit in the series. In Thursday's game, the score was tied 2-all when the brawl began.

Counting the three who were tossed Thursday, the Royals lead the majors this season with nine players ejected (Ventura has been ejected from his past two starts). The Padres trail in second place with only three players tossed.

"They are a young group of guys who go about their business in an exciting and aggressive way," Eaton said of the Royals' recent run-ins. "And that's why we have the utmost respect for them. They've earned everything they've gotten and now they want to keep it. You don't expect anything less. With the other beef with other teams, I'm not sure."

Ventura acknowledged that with his recent outbursts this month -- an ejection for hitting Athletics third baseman Brett Lawrie with what appeared to be a retaliatory pitch and an exchange of words with Angels center fielder Mike Trout-- he might be earning a reputation, saying, "I've thought about that, and some of my actions are certainly putting me in a less-than-favorable light, as well as the team. That's important to me, and I need to work on it and be better.

"The last three outings, my emotions have spilled over and gotten the better of me. I'm an emotional pitcher, but I need to work on controlling them. I want to do that, I certainly want to avoid the results, games ending the way they have. I want to use the emotions to pitch well, but not go over the top and have these kinds of incidents."

Royals manager Ned Yost said his young No. 1 starter will learn to control his emotions in time.

"He's got to understand that he's a really good pitcher, and teams are going to try to take him out of his game."

Yost said he talked with Ventura after the incidents with Trout and Lawrie.

"You know how many times my mom had to tell me something before I finally heard it?" he said. "It takes time."