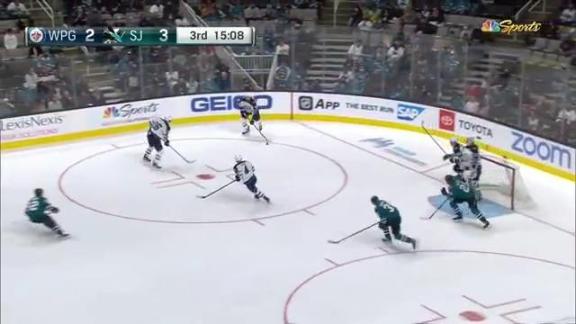 SAN JOSE, Calif. -- - Jasper Weatherby scored the tying goal in his NHL debut and William Eklund set up the go-ahead score in his first career game to lead the San Jose Sharks to a season-opening 4-3 victory over the Winnipeg Jets on Saturday night.

"You couldn't ask for a much better way to start the season," coach Bob Boughner said. "It was a team win. We tried to play to our identity as best we could. I think everybody knows there were some nerves there at the beginning, especially for some of the young guys. We were a little jittery in the first period and we settled down a little bit."


Andrew Cogliano, Tomas Hertl and Rudolfs Balcers also scored to the delight of the first big crowd in San Jose since the pandemic shut down the NHL in March 2020.

Adin Hill made 20 saves in his San Jose debut to earn the win.

Pierre-Luc Dubois, Andrew Copp and Jansen Harkins scored for the Jets, who lost their second straight game to open the season.

Connor Hellebuyck made 27 saves but allowed a pair of power-play goals for the second straight game.

"Special teams, got to sharpen those up," Copp said. "It seems a little disconnected. Specifically on the kill, maybe our D is just a little too far apart."

The Sharks broke open the game with two goals early in an eventful third period. With Dubois off for elbowing, the 19-year-old Eklund fired a shot on net that Hellebuyck stopped, but Hertl was there to knock in the rebound.

Less than two minutes later, Balcers knocked in a rebound of a shot by Timo Meier just before colliding with Hellebuyck in the crease, setting off a wild scrum between the teams. Hertl then fired up the crowd as he headed to the penalty box.

"We score and they kind of push him and two guys jump on him so I just tried to jump in, save his life," he said. "I think fans missed it, too, and it was 4-2, so I just lift my hands up and told the fans to get going because we missed them. It was a long two years and we're so happy we can play again in front of our fans and they were amazing tonight."


The teams traded short-handed goals early in the second period, with Copp taking advantage of miscommunication between Hill and Erik Karlsson to give Winnipeg a 2-0 lead, and Cogliano answering for San Jose.

"We needed something to happen at 2-0," Boughner said. "We needed the next one or it would have been a tough mountain to climb there. ... It just lit our whole bench up."

The Sharks then tied it late in the period when Weatherby beat Hellebuyck from the circle on the power play to become the first Sharks player to score in his NHL debut since Meier did it in Montreal on Dec. 16, 2016.

Weatherby and Eklund were two of five rookies to play for the Sharks.

Eklund, the seventh pick in this year's draft who turned 19 on Tuesday, is the fifth-youngest Sharks player ever. He and Jonathan Dahlen played wing on the top two lines, while Weatherby centered the fourth line, all in their debuts.

This marked the first time two Sharks got points in their debuts since Marco Sturm and Alexander Korolyuk did it on Oct. 4, 1997, against Chicago.


Lane Pederson also played on the fourth line and Jake Middleton was in on defense as rookies, but both have NHL experience.

BACK ON THE ICE

Jets C Mark Scheifele returned after missing the opener to serve the final game of a four-game suspension he received in the playoffs last season for his hit on Montreal's Jake Evans.