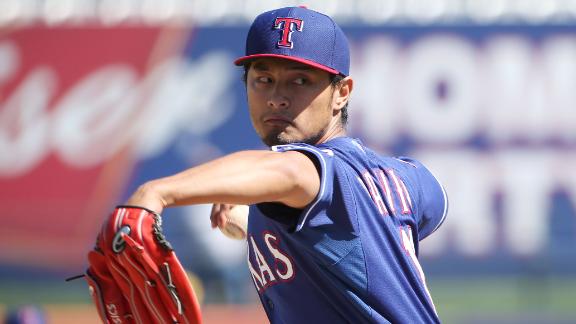 SURPRISE, Ariz. -- Yu Darvish and the Texas Rangers will get one more opinion before the ace pitcher likely agrees to season-ending elbow ligament-replacement surgery.General manager Jon Daniels said Wednesday that Dr. David Altchek, the New York Mets' medical director and an expert in Tommy John surgery, recommended the procedure after examining Darvish on Tuesday.The Rangers will have Dr. James Andrews review images of Darvish's elbow before they make a final decision later this week."Why not? This is a big decision for him and organization," Daniels said when asked about getting a third opinion from Andrews.An MRI Friday revealed partially torn ligaments and inflammation in Darvish's right elbow. That came a day after Darvish felt tightness in his triceps while warming up for his spring training debut, and then threw 10 of 12 pitches for strikes in his only inning before telling anyone about the discomfort.After seeing Darvish on Tuesday, Altchek had the same recommendation as Rangers team physician Dr. Keith Meister, who initially examined the pitcher."Yu and the organization and both doctors are on the same page," Daniels said.There are no plans for Darvish to visit Andrews.Darvish was back in Rangers camp Wednesday, in uniform and playing catch in the outfield of one of the fields. He was throwing left-handed, something he routinely does during conditioning. Daniels said Darvish wanted to be around his teammates.Without a vastly different opinion from Andrews, the surgery for the 28-year-old Darvish likely will take place next week. He could be sidelined until early in the 2016 season.An All-Star in each of his three seasons since coming from Japan, Darvish started last season on the disabled list after experiencing neck stiffness in spring training. He missed only one start then, and was 10-7 with a 3.06 ERA in 22 starts and made his final appearance on Aug. 9, when he felt elbow inflammation.He is 39-25 in 83 starts for the Rangers, with 680 strikeouts in 545 1-3 innings. He led the majors with 277 strikeouts in 2013.