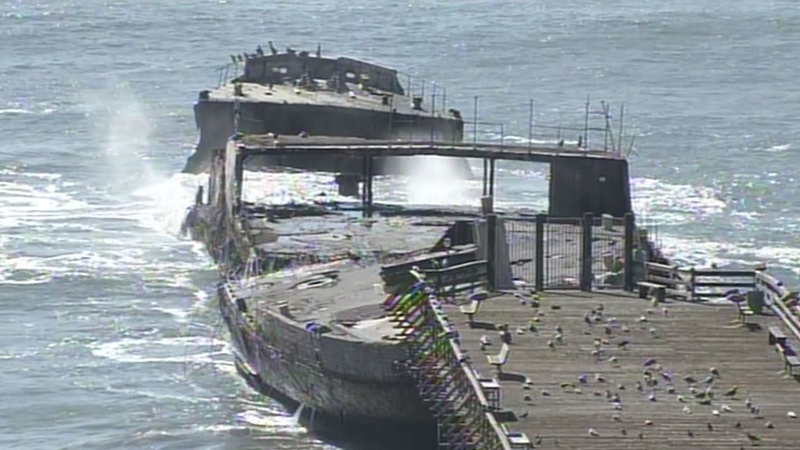 APTOS, Calif. (KGO) -- Our recent stormy surf has claimed another victim off our coast. The S.S. Palo Alto, a cement ship at Seacliff State Beach in Aptos, has taken a pounding and now the pier leading to the tourist magnet has been closed.

For visitors to California's coast, a stop in Aptos is usually on the list.

"There's a few things that I tell them that they have to see, and of course, the cement boat is one of them," Santa Cruz resident Megan Maloney said.

But in recent weeks, the backside of the S.S. Palo Alto has snapped in half and broken apart.

"Here in the Monterey Bay, we've seen very large surf, with very little break in-between, and it's that repeated beating down by the ocean that seems to be having the biggest effect on the ship this year," State Parks public safety superintendent Bill Wolcott said.

The ship was intended to be a tanker during World War I, but never made it into service. After sitting in Oakland for 10 years, it was purchased by the Seacliff Amusement Corporation and towed to Seacliff State Beach in 1929 where it found life as an amusement ship, before becoming a fishing pier. Nowadays, it serves as an artificial reef for marine life.

"Everybody is running down to check it out, because it's a significant change in the way the ship looks. I mean, that's a big chunk of concrete to have moved that far," Aptos History Museum curator John Hibble said.

The Department of Parks and Recreation has no plans to remove the ship, but as a precaution, they've closed the gates to the pier.