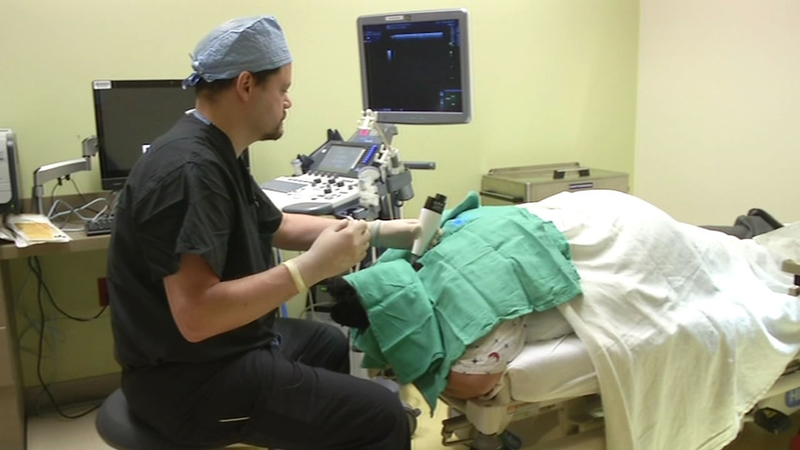 PALO ALTO, Calif. (KGO) -- For many people suffering from intense migraine headaches, any relief at all can be life-changing. Now an emerging treatment is blocking that pain by literally freezing it away.

Whether it's driving her kids on a vacation to Legoland, or just helping them with homework, Keisha McQueen is always worried that a migraine headache could devastate their plans.

"It's terrible. I get nauseous, just very, very, very intense," she says.

After years of powerful medications, McQueen is turning to Dr. Einar Ottestad, M.D., director of acute pain service at Stanford Health Care. Instead of medicating her migraine, he's hoping to freeze the pain away with a device called iovera. It works by forcing nitrous oxide into a needle shaped tube.

Instead of just reducing inflammation like you might do with an ice pack, the iovera device actually penetrates the tissue to deliver a targeted burst of cold, so intense it can deaden the nerves contributing to McQueen's migraines.

"And we clearly know these guys are involved in the head pain and in maintaining it, because patients do get better when do these nerve blocks," Ottestad said.

First, Ottestad uses an ultra-sound to probe the nerves and map the pain response. With the targets mapped, he applies the iovera needle to systematically deaden the nerve endings at each point. Patients often feel a slight burning sensation when the cold cannula touches the nerve.

"When you feel that, that's actually a great sign. And after about 20 seconds as the nerve gets frozen, the pain usually starts getting better," Ottestad explains.

Doctors several methods, including Botox injections, can also be used to block nerve pain. But the results are all temporary, only lasting as long as it takes for the nerves to regenerate. He believes the cold, or cryotherapy, may offer longer relief.

"At this point, I've been seeing probably six weeks at the lower end, but some of my patients are at four months without recurrence of pain," he says.

McQueen says several months' worth of relief from her debilitating migraines would be life changing for her entire family.

"I just want to be able to enjoy my kids without pain. You know, talking at the table and not have to worry about that mommy has a headache," says McQueen.

Iovera was developed here in the Bay Area by a company called Myoscience, based in Fremont. We first profiled the technology when it was being applied to knee and joint pain.