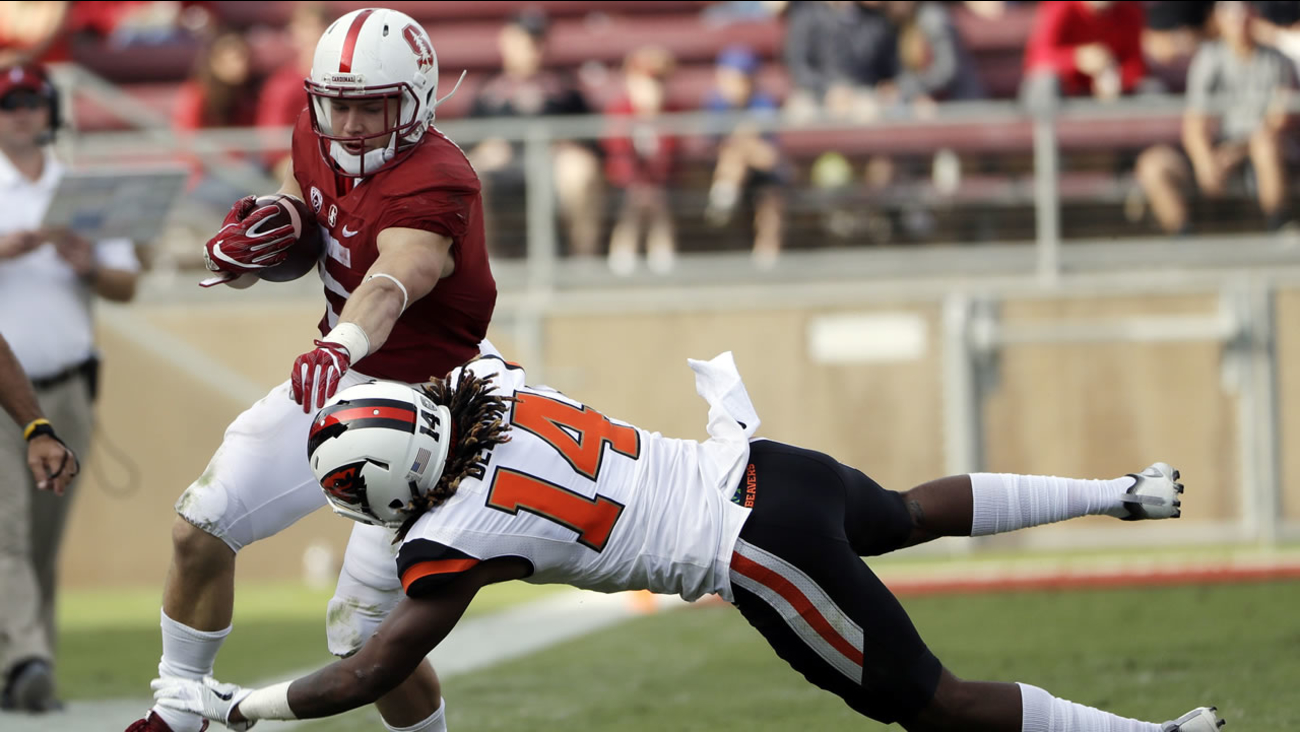 STANFORD, Calif. -- With a young quarterback making his second career start, Stanford coach David Shaw was fully comfortable having his team run the ball on its final 29 plays from scrimmage.

McCaffrey rushed for 199 yards and a touchdown, Love scored on a 56-yard touchdown run and Stanford beat Oregon State 26-15 on Saturday afternoon.

Conrad Ukropina kicked a career-high four field goals, including a personal best-tying 52-yarder in the first half, to help the Cardinal (6-3, 4-3 Pac-12) become bowl eligible.

"We were running the ball for six yards a clip, they're getting a little bit tired and we've got two running backs we can rotate through there," Shaw said of his decision to keep the ball on the ground over the final 20 minutes. "When you've got an offensive line that's feeling good and creating creases, and two running backs that are getting better and better, (with) a two-score lead . why put it up in the air? Let's ground this thing and let's end the game."

Stanford sputtered offensively much of the day and had to overcome three fumbled snaps by quarterback Keller Chryst but held on to win its seventh straight against Oregon State (2-7, 1-5).

The Cardinal did it behind another strong outing by its defense, which intercepted Beavers quarterback Marcus McMaryion twice in the second half.

More importantly, Stanford piled up 365 yards rushing and controlled the ball for more than 39 minutes.

"It went well but I go as the O-line goes and they did a fantastic job today," McCaffrey said. "Still, at the end of the day we have a lot of things we have to work on. We have to finish the ball in the end zone. Too many field goals."

McCaffrey, whose 51-yard run in the first half helped set up Ukropina's second field goal, scored on a one-yard run in the third quarter. The 2015 Heisman Trophy finalist was also stopped on a 4th-and-1 plunge late in the fourth quarter.

Love, a sophomore who filled in when McCaffrey was injured earlier this season, finished with 89 yards on nine carries.

"If there's nobody between him and the goal line you're not going to catch him," Shaw said of Love.

Stanford's ground game was key on a day Chryst was more effective running the ball than throwing it in his second career start. Chryst completed 10 of 17 passes for 60 yards but rushed for 83 including a 44-yard keeper that set up McCaffrey's touchdown.

The win puts Stanford in line for a bowl bid. The Cardinal have played in the Rose Bowl three of the past four years but aren't in the running for the Pac-12 title this time around despite going into the season as favorites.

Ryan Nall rushed for 77 yards on 10 carries for Oregon State. The Beavers have lost four straight and six of seven.

McMaryion passed for one touchdown and ran for another but completed only 10 of 24 attempts for 137 yards.

"Credit Stanford's defense," McMaryion said. "It's real simple. They line up and come at you. They did well in man coverage. We have to execute better."

"I can help the offense more, show my athleticism in the run aspect of the game."

Oregon State: Nall had another solid afternoon running the ball but not much else went right for the Beavers. The offense failed to generate a single first down on four drives and committed a pair of turnovers. That was simply too much to overcome for coach Gary Andersen's team.

Stanford: It's been a rough season for Shaw and his staff but they're still headed for the postseason and that's a positive. Even without much production from the passing game this was an easier-than-it-looked win for the Cardinal. McCaffrey and Love gave the offense a much-needed boost but it was the defense again that made the difference.
Related topics:
sportsstanford universitystanford universitystanford cardinalfootball
Copyright © 2022 by The Associated Press. All Rights Reserved.
STANFORD CARDINAL
Pac-12 spring football recaps: Breaking down the offseason for each...
How college football's transfer portal is changing spring practice
College football spring games 2022: Storylines to watch this weekend
No. 2 Arizona outlasts Stanford 84-80 in Pac-12 quarters
TOP STORIES
Davonte Adams' cousin killed in shooting at busy Bay Area park
ABC7's new 24/7 live stream offers local news, weather
Body of woman killed nearly 18 years ago found in Oakland
1st monkeypox case in US this year reported in Massachusetts
Biden invokes Defense Production Act for formula shortage
Meet 'San Fransicko' author hoping to replace Newsom as governor
Mother of teen who went missing on spring break in 2009 speaks out
Show More
Solar power finds floating home in Wine Country
Stocks plunge as Target's woes renew inflation fears
Fire risk increases in Bay Area on hottest day of week
Renter scams using Zelle to receive money from victims
1st non-binary Bay to Breakers winner won more than just the race
More TOP STORIES News