'Start Here': Barr says Trump's tweets 'make it impossible for me to do my job' 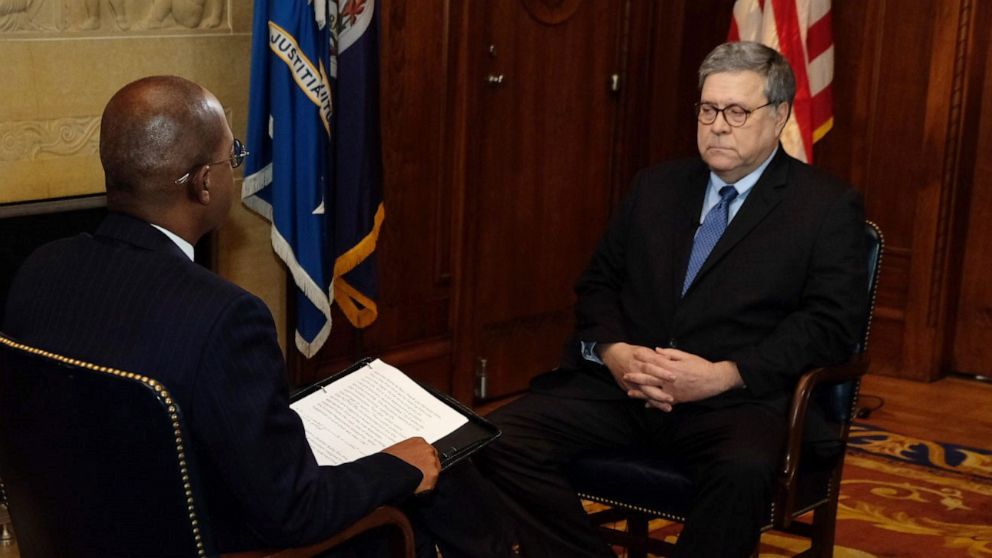 Responding to criticism over the Department of Justice's decision to overrule the Roger Stone sentencing recommendation made by its own prosecutors, Attorney General William Barr told ABC News in an exclusive interview that the move was "fair and reasonable," while insisting he wasn't influenced by a critical tweet from President Donald Trump that came hours before the reversal was announced.

"I'm happy to say that in fact, the president has never asked me to do anything in a criminal case," he told ABC News Chief Justice Correspondent Pierre Thomas, but added that the president's tweets "make it impossible for me to do my job."

Trump tweeted earlier this week that the prosecution's initial recommendation of seven to nine years in prison for Stone, convicted in November on charges including obstruction of Congress and witness tampering, was a "miscarriage of justice."

"The White House is saying they still have full confidence in Barr, that they're really not that concerned about his comments, but what happens if the president keeps tweeting about criminal cases. What does Barr do then?" Thomas says on "Start Here" today.

A federal judge has granted Amazon's request to temporarily block the Pentagon from proceeding with Joint Enterprise Defense Infrastructure, or JEDI, a $10 billion cloud-computing contract awarded to Microsoft.

Amazon filed a lawsuit in November alleging that the president's "personal animus" towards CEO Jeff Bezos, and the Washington Post, which he owns, caused the Department of Defense's decision to be "based on bias and bad faith."

"Amazon is genuinely saying that this has not been a fair process, at the same time, DOD has said that all along we're going to move exactly through this contracting process as we would any other contract," ABC News' Elizabeth McLaughlin tells the podcast.

In a statement responding to the ruling, Pentagon spokesman Lt. Col. Robert Carver said, "We are disappointed in today's ruling and believe the actions taken in this litigation have unnecessarily delayed implementing DoD's modernization strategy and deprived our warfighters of a set of capabilities they urgently need. However, we are confident in our award of the JEDI Cloud contract to Microsoft and remain focused on getting this critical capability into the hands of our warfighters as quickly and efficiently as possible."

3. How do you do fellow kids

"This isn't just about him spending gobs of money to get his name out there; he is doing really smart things with some of his money to get himself into a conversation that he could potentially be owning in two weeks' time," he tells "Start Here."

'Caucus calculator': The Nevada Democratic caucuses are just over a week away and in an effort to avoid the same fate as Iowa, the state's Democratic Party revamped their reporting strategy to ensure what they hope will be an infallible process on caucus day.

'Support for assistance': The Pentagon will once again shift billions of dollars in its accounts in order to fund hundreds of miles of new border wall at the request of the Department of Homeland Security, a move that mirrors actions taken last year to help the Trump administration build sections of the wall along the U.S.-Mexico border.

FiveThirtyEight's Perry Bacon Jr. takes a look at why Elizabeth Warren is struggling.

When astronaut Christina Koch returned home this week from a nearly 11-month space mission, she said she wasn't sure who was more excited about it: her or her dog.

The record-breaking astronaut posted a video Thursday showing the joyous reunion during which her rescue dog, LBD (short for Little Brown Dog), couldn't contain herself.

Koch returned to her Galveston, Texas, home three days after landing in Kazakhstan after a 328-day mission on the International Space Station. The trip shattered the record for the longest single spaceflight by a woman, which was previously held by NASA astronaut Peggy Whitson, who set the record with 288 days in space in 2017.

"I didn't necessarily know what this mission was going to turn into when I launched," Koch told ABC News' senior transportation correspondent David Kerley in an interview from the space station last month. "But I think one of the things about the astronaut corps is that we are taught to be adaptable and to be ready for anything in a mission that comes our way."
Report a correction or typo
Related topics:
abc newsnational
Copyright © 2021 ABC News Internet Ventures.
More Videos
From CNN Newsource affiliates
TOP STORIES