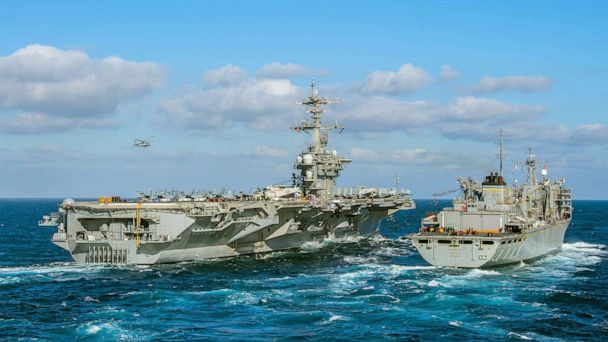 It's been a year since President Donald Trump pulled out of the Iran nuclear deal, which ratcheted up tensions between the two nations, both of which have since taken turns pouring kerosine onto a campfire.

The U.S. deployed a carrier strike group, bombers and a Patriot anti-missile battery to the Middle East after alerts of potential attacks by Iran or its proxies. On Sunday, four oil tankers were attacked in the Persian Gulf, and an initial U.S. assessment found Iran or its proxies responsible for placing explosive charges on the ships.

Amid the heightened tension in the region, The New York Times reported that the Trump administration was considering sending 120,000 troops to the Middle East if Iran struck U.S. forces or resumed its nuclear program. When questioned by ABC News on Tuesday whether he was considering those plans, Trump dismissed the report as "fake news," and then suggested he would send an even larger force.

"I think it sends ... an even clearer message than they've been trying to send in the past couple of weeks that this is all about warning Iran to behave," ABC News Chief Global Affairs Correspondent Martha Raddatz says on "Start Here." "I think they're just keeping up the drumbeat of warnings to Iran."

Early Wednesday, the State Department ordered out of Iraq all non-emergency government employees.

A newly released recording has revealed that the American Airlines pilots union urged Boeing to fix the grounded 737 Max jet's software months before the deadly Ethiopian Airlines crash, according to the Dallas Morning News.

Did Boeing dismiss their concerns? A Boeing representative reportedly told the pilots at a meeting in Dallas in November, in the aftermath of the Lion Air crash in Indonesia, "I don't know that understanding this system would've changed the outcome. In a million miles, you're going to maybe fly this airplane, maybe once you're going to see this, ever."

A Boeing spokesperson would not directly address ABC News' questions on the recording but did say in a statement that the company continues to work with global regulators and customers to return the 737 Max fleet to service.

ABC News Senior Transportation Correspondent David Kerley notes on "Start Here" that the FAA's test flight of the new software could come in the next several days.

Attorney General William Barr has tasked U.S. Attorney for the District of Connecticut John Durham with overseeing a probe into the origins of the Russia investigation amid allegations there was improper surveillance of the Trump campaign during the 2016 election.

"This is pre-Mueller, months before Mueller was ever appointed, when the FBI was looking at the issues surrounding Russia and looking at what they did exactly and who they went after: people who were related to the Trump campaign," ABC News' Mike Levine says.

It's the third active investigation within the Department of Justice probing the matter. The attorney general has expressed "concerns" that there was potential inappropriate "spying" on members of the Trump campaign, but also acknowledged recently to the Senate Appropriations Committee, "I am not saying that improper surveillance occurred."

FBI Director Christopher Wray, who's cooperating with Barr's investigation, last week distanced himself from Barr's use of the word "spying" to describe his bureau's investigative tactics, telling the same committee, "That's not a term I would use."

On Tuesday, the president said Wray's answer was "ridiculous."

Rep. Alexandria Ocasio-Cortez, D-N.Y., who introduced the legislation, blasted reports that former Vice President Joe Biden was working on a "middle ground" approach on climate change, while Biden defended his environmental record, saying he would release his own plan "very shortly."

"It's a sign that the Democratic voting base wants specific ideas," ABC News Deputy Political Director MaryAlice Parks says on today's podcast. "They don't just want to hear that you care about the environment or you believe in climate change. They want to know, What are you going to do about it?"

'Marriage fraud is a serious crime': In Texas, 96 people are indicted in a marriage-for-Green Card scam.

'The color of her feet were like purple': An Oklahoma man is arrested in Arizona when authorities discover his wife's dead body in his SUV.

New Orleans won the NBA's golden ticket. Now what happens?: The Pelicans landed the No. 1 overall pick despite having just a 6% chance to do so, and they're widely expected to use it on Duke star Zion Williamson. "It's just an incredible blessing for our organization," Pelicans general manager David Griffin told reporters.

What would you give a stranger? A wave? A hug? How about a kidney?

That's what Starr Gardy, a mom of two from Charleston, South Carolina, decided to do after seeing another mother's plea for help.

Gardy had stopped at a Walmart for party supplies for her daughter's birthday when she saw a message written on the window of Lashonda Pugh's parked SUV.

"It said, 'Please help. My son needs a kidney,' and gave his blood type," Gardy told "Good Morning America." "I just froze, and I felt so moved and thought, 'What if I could help?'"

Pugh has been employed at the Walmart location for 14 years and was working the day Gardy saw the message in the lot, she said. It turned out that Gardy was a match for her son, Daniel Jones Jr.

Gardy and Jones Jr., underwent transplant surgery at Charleston Hospital on May 1, where both families met for the first time after the operation.

"It felt like she was family," Pugh said. "We hugged and cried and I thanked her for giving my son a second chance at life."
Report a correction or typo
Related topics:
abc newsnational
Copyright © 2020 ABC News Internet Ventures.
More Videos
From CNN Newsource affiliates
TOP STORIES
Outdoor dining, wine tasting reopens with COVID-19 safeguards in Sonoma Co.