Warriors prepare for round 2 vs. Blazers without Curry 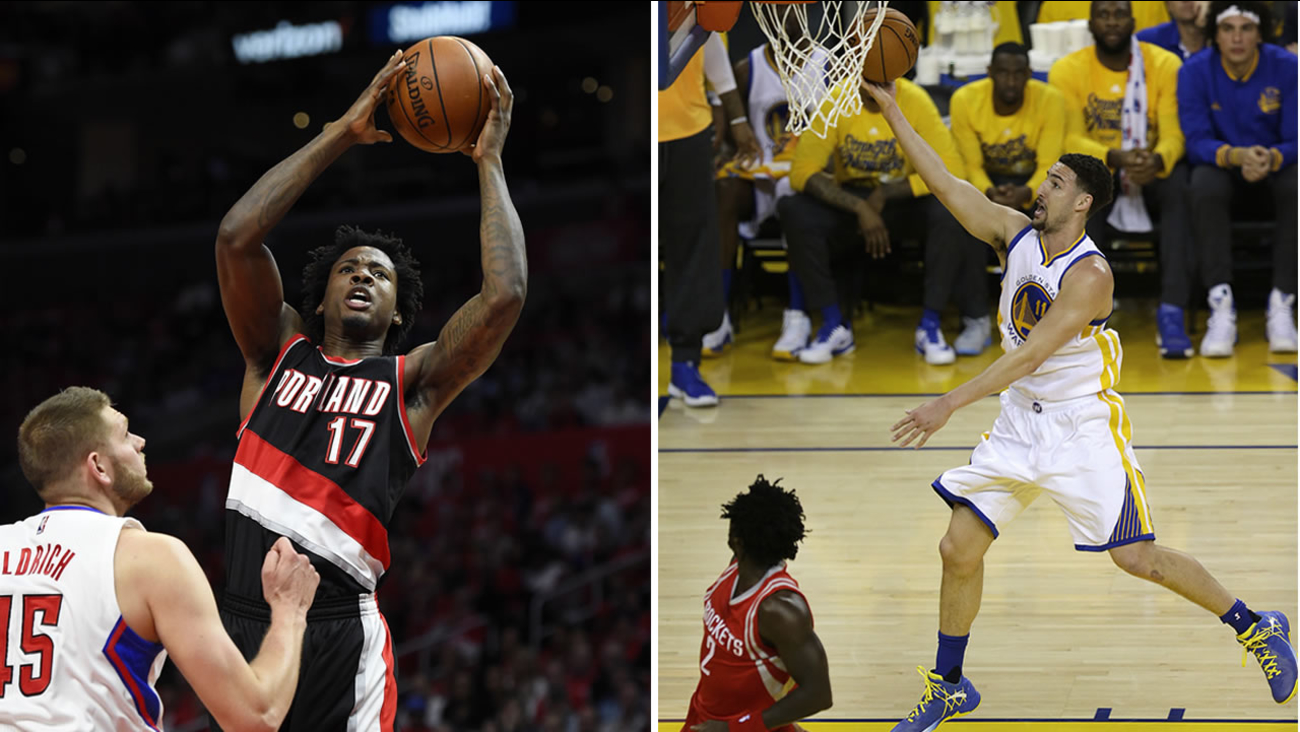 OAKLAND, Calif. -- Stephen Curry's knee injury did little to slow down the Golden State Warriors in their first-round series.

Surviving without the reigning league MVP figures to be a little bit harder in the second round against Portland.

WATCH LIVE AT 12:30 PM: Warriors take on the Trailblazers in Game 1 of second round of NBA Playoffs on ABC7

Golden State opens the best-of-seven series against the Trail Blazers on Sunday with Curry on the sideline and the knowledge that Portland is able to handle a full-strength Warriors squad after handing them their most lopsided loss of the season.

"It wasn't a fluke," coach Steve Kerr said Saturday. "That's what happens if you play Portland and you throw the ball away. They've got explosive players all over the floor and 3-point shooting everywhere."

Kerr didn't show his players film of that 137-105 loss on Feb. 19 when Golden State committed 13 turnovers in the third quarter on the way to its most lopsided loss of the season.

Guard Klay Thompson said the players remembered that loss in the first game back from the All-Star break well and didn't need a reminder on film.

"We kind of let our guard down a little bit and just kind of overlooked them a bit," Thompson said. "That's a team you can't overlook. It bit us and we learned our lesson."

The Blazers sure won't overlook the Warriors, even with Curry not available at the start of the series. Golden State outscored Houston by 60 points in the six quarters after Curry sprained the MCL in his right knee at the end of the first half in Game 4 in Houston.

With a shooter like Thompson, playmakers like Draymond Green and Shaun Livingston and the depth that helped them win 73 games, the Warriors are far more than just Curry.

Here are some other things to watch this series:

DYNAMIC BACKCOURT: The Warriors have the game's most potent backcourt with Curry and Thompson but the Blazers are close with Lillard and NBA Most Improved player CJ McCollum. The two combined for 45.9 points per game and are both capable as long-ranger shooters and creators with the ball.

"They have two guys who can make plays all over the floor and shoot 3s," Kerr said. "Houston had one. So when you have two it changes everything, because now you're plugging two leaks and it takes all five guys to be in tune with one another."

STEPH'S STATUS: Curry could return at some point this series. Kerr said he'd be "shocked" if Curry could play Game 2 on Tuesday but said he's supposed to get back on the practice floor within the next few days.

"If he can progress throughout the week, fortunately for us Game 3 isn't until Saturday, Kerr said. "Maybe we'll get a chance to see him on the court for a couple of days and see what he looks like."

STYLE OF PLAY: Both teams were content to play at a fast pace in the regular season, with the winning team in all four games scoring at least 128 points. But with Curry's absence and the intensity of the playoffs, the pace might slow down a bit to start this series.

"We were able to score but to beat them, we had to basically outscore them," Lillard said. "Against a team like that, if you don't get stops and you let them get rolling, if we weren't making shots the way we were, we probably would have lost by 30. We can't let them be as comfortable as they were that night. They're going to make shots, we can't get discouraged by that, but every possession matters when you play a team like that."

QUICK TURNAROUND: The Blazers don't have much time to prepare for Game 1. They finished their first-round series against the Los Angeles Clippers late Friday night, traveled to Oakland on Saturday and will take the court for an afternoon game on Sunday.