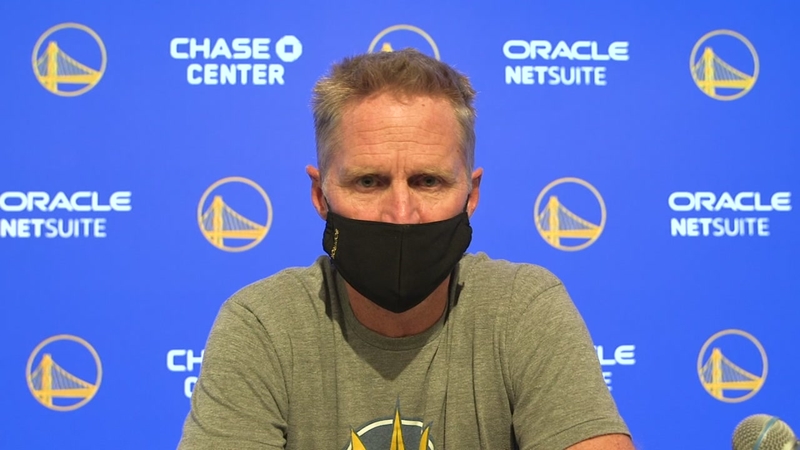 Kerr, who is a known voice in the NBA for speaking out against racial injustice and gun violence, says he just heard the news of the decision after practice. The grand jury brought no charges against three Louisville police officers for killing Taylor. The only charges are against one officer, for wanton endangerment because shots were fired into the home of Taylor's neighbor.

"It's just so demoralizing. It's so discouraging," Kerr said. "I just keep thinking about the generation of American kids of any color; is this the way we want to raise them? Is this the country we want to live in? There's just so much violence. There's so much shooting."

He also called for more accountability across the country when it comes to violence, shootings in particular.

"It comes in so many forms, whether it's school shootings or vigilanteism or police brutality, neighbor to neighbor. There's just so much violence, and it's demoralizing when we can't be accountable or hold anyone to account for it," he said.

Is charging the police officers who killed Breonna Taylor with wanton endangerment holding them accountable?

Kerr didn't explicitly say. But the implication was, no.

He went on to say, "It's such a tough hill to climb, but this long history of racism that we have in our country continues, and it continues in the form of this kind of violence, state-sanctioned violence over and over again that we're seeing, and it's devastating."

This isn't the first time Coach Kerr has made strong, public statements about racism in America.

He recently appeared on ABC7's "After the Game," where he spoke candidly about police brutality and his definition of racism.

"It's really easy for a person like me to make a statement, maybe donate to a charity and then go back to my really nice house in my nice neighborhood and don't think anything more of it." Warriors Head Coach Steve Kerr talks about the most important lesson he's learned.