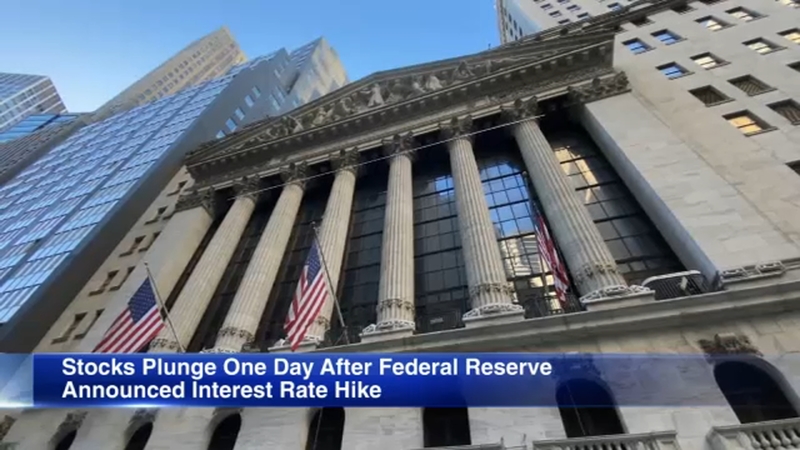 NEW YORK -- Wall Street is tumbling toward its lowest point in more than a year on Monday as renewed worries about China's economy pile on top of markets already battered by rising interest rates.

The S&P 500 was 2.7% lower in afternoon trading after coming off its fifth straight losing week, its longest such streak in more than a decade. It joined a worldwide swoon for markets Monday. Not only did stocks fall across Europe and much of Asia, but so did everything from old-economy crude oil to new-economy bitcoin.


The Dow Jones Industrial Average was down 488 points, or 1.5%, at 32,417, as of 2:10 p.m. Eastern time, and the Nasdaq composite was 3.9% lower as tech-oriented stocks again took the brunt of the sell-off. Monday's sharp drop leaves the S&P 500, Wall Street's main measure of health, down roughly 16% from its record set early this year.

Most of this year's damage has been the result of the Federal Reserve's aggressive flip away from doing everything it can to prop up financial markets and the economy. The central bank has already pulled its key short-term interest rate off its record low of near zero, where it sat for nearly all the pandemic. Last week, it signaled additional increases of double the usual amount may hit in upcoming months, in hopes of stamping out the high inflation sweeping the economy.

SEE ALSO: How did the Great Resignation disrupt the future of work?
EMBED More News Videos

More people quit their jobs in 2021 than any year on record. Was this a result of the pandemic or a bigger shift in the workplace?

The moves by design will slow the economy by making it more expensive to borrow. The risk is the Fed could cause a recession if it moves too far or too quickly. In the meantime, higher rates discourage investors from paying very high prices for investments, because investors can get more than before from owning super-safe Treasury bonds instead.

That's helped cause a roughly 29% tumble for bitcoin since April's start, for example. It dropped 7.7% Monday, according to Coindesk. Worries about the world's second-largest economy added to the gloom Monday. Analysts cited comments over the weekend by a Chinese official warning of a grave situation for jobs, as the country hopes to halt the spread of COVID-19.

Authorities in Shanghai have again tightened restrictions, amid citizen complaints that it feels endless, just as the city was emerging from a month of strict lockdown after an outbreak.

The fear is that China's strict anti-COVID policies will add more disruptions to worldwide trade and supply chains, while dragging on its economy, which for years was a main driver of global growth.


In the past, Wall Street has been able to remain steady despite similar pressures because of the strong profit growth that companies were producing.

But this most recent earnings reporting season for big U.S. companies has yielded less enthusiasm. Companies overall are reporting bigger profits for the latest quarter than expected, as is usually the case. But discouraging signs for future growth have been plentiful.

The number of companies citing "weak demand" in their conference calls following earnings reports jumped to the highest level since the second quarter of 2020, strategist Savita Subramanian wrote in a BofA Global Research report. Tech earnings are also lagging, she said.

The tech sector is the largest in the S&P 500 by market value, giving it additional weight for the market's movements. Many tech-oriented companies saw profits boom through the pandemic as people looked for new ways to work and entertain themselves while locked down at home. But slowdowns in their profit growth leave their stocks vulnerable after their prices shot so high on expectations of continued gains.

The higher interest rates engineered by the Fed are also hitting their stock prices particularly hard because they're seen as some of the market's most expensive. The Nasdaq composite's loss of roughly 25% for 2022 so far is much sharper than that for other indexes.

Electric automaker Rivian Automotive slumped 18.8% Monday as restrictions expire that prevented some big investors from selling their shares following its stock market debut six months ago. It's lost more than three quarters of its value so far this year.

The yield on the 10-year Treasury has shot to its highest level since 2018 as inflation and expectations for Fed action rose. It moderated Monday, dipping to 3.09% from 3.12% late Friday. But it's still more than double the 1.51% level where it started the year.

Apart from concerns about inflation and coronavirus restrictions, the war in Ukraine is still a major cause for uncertainty. More than 60 people were feared dead after a Russian bomb flattened a school being used as a shelter, Ukrainian officials said. Moscow's forces pressed their attack on defenders inside Mariupol's steel plant in an apparent race to capture the city ahead of Russia's Victory Day holiday Monday.

Even the energy sector, a star performer in recent weeks, was under pressure Monday. Benchmark U.S. crude fell 6.3% to $102.87 per barrel, though it's still up about 40% this year. Brent crude, the international standard, fell 6% $105.64 a barrel.