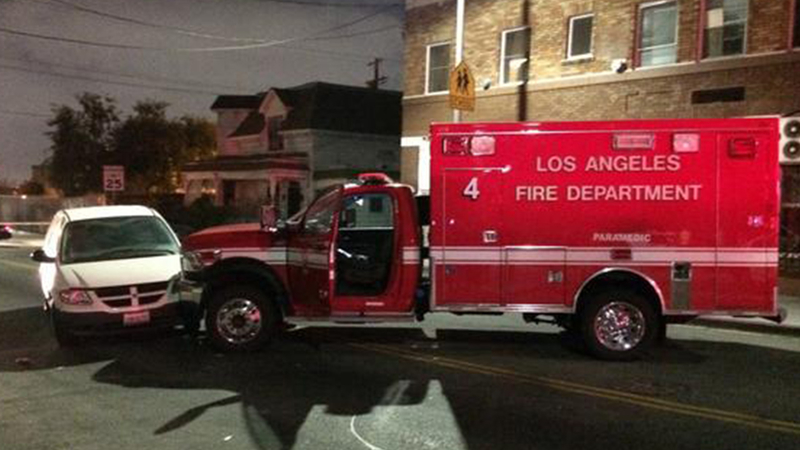 A man undergoing treatment for hallucination inside a Los Angeles Fire Department ambulance in downtown Los Angeles stole the emergency vehicle Sunday night, forcing two firefighter paramedics to jump out and an engine company to pursue.

The firefighters were treating a patient at about 7 p.m. at Alameda and 3rd streets, when he pulled out his IV and ran out of the ambulance. The man reappeared a short time later, jumped into the ambulance and began driving away. The two firefighter paramedics quickly jumped out.

As per protocol, the ambulance was left running.

The engine company followed the ambulance until LAPD officers arrived and took over the pursuit. About five minutes later, the ambulance crashed into a minivan at Union Place and Beverly Boulevard in the Rampart area of Los Angeles.

The two people in the minivan suffered minor injuries. No firefighters were injured or involved in the crash, fire officials said.

"Initially it didn't make sense at all to anybody that the fire department was chasing one of its own vehicles," LAPD Lt. Theresa Coyle said. "As it became clear, gratefully no one was seriously injured."

The male suspect was arrested and is expected to face felony evading and carjacking charges.