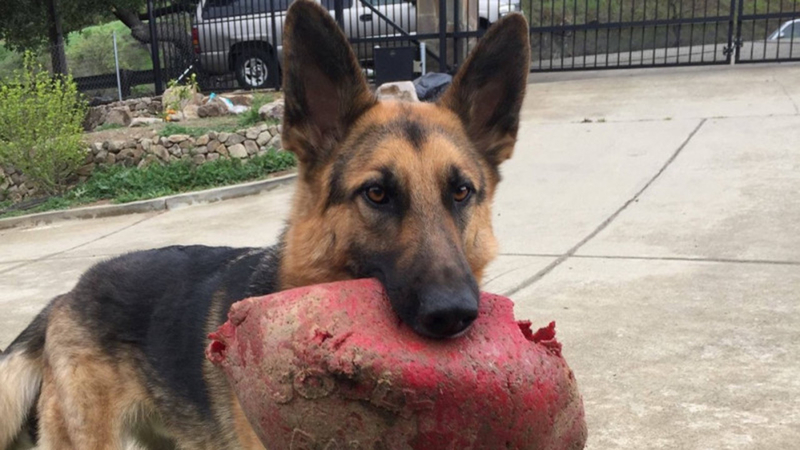 CASTRO VALLEY, Calif. (KGO) -- A Castro Valley woman who rescues German shepherds says her dog was stolen from her property while she was at home.

The Alameda County Sheriff's Office is investigating but she's hoping someone brings her dog home. She says he's very valuable to her rescue operation.

"I can't even think about what he's going through," JJ Jacobson said.


She's struggling after she says somebody stole her 3-year-old German shepherd, Murfee, from her front yard Sunday afternoon. "It just kills me. I hope to God they are good to him," she said.

Jacobson says Murfee was playing outside with her other dog, Shade, between 3:30 p.m. and 5 p.m. on Sunday. And when Murfee was nowhere to be found after 5 p.m., "That's when I knew taht somebody had stolen him," she said.

She says the fence is too high for Murfee to jump over and get out on his own, but she says it's possible someone who's been here and knows the property knew how to get inside and take her dog.


"The only way that somebody would know that Murfee is here is that they've driven by and they've seen him," she said. "There is a gentleman who has come and he has numerous times talked about dogs and he's always interested in Murfee because he's the nicer dog."

Jacobson doesn't know who this man is, but she describes Murfee as a popular dog with humans. "We could have adopted Murfee out 84 times," she said.
She says Murfee is the mentor of the other German shepherds who she rescues and rehabilitates. He's said to be a dog's dog who brings other shepherds out of their shells and helps ready them for adoption.

"All you do is look at Murfee and he goes rub my bully. That's the kind of dog he is," Jacobson said.

She filed a report with the Alameda County Sheriffs, who say they are treating this case as a suspicious circumstance, but they do not have any evidence that prove Murfee was dog-napped since there are no surveillance cameras in the area and no witnesses to Murfee's disappearance.

A GoFundMe page for Murfee has been set up, as well as a Facebook page to help with the search.