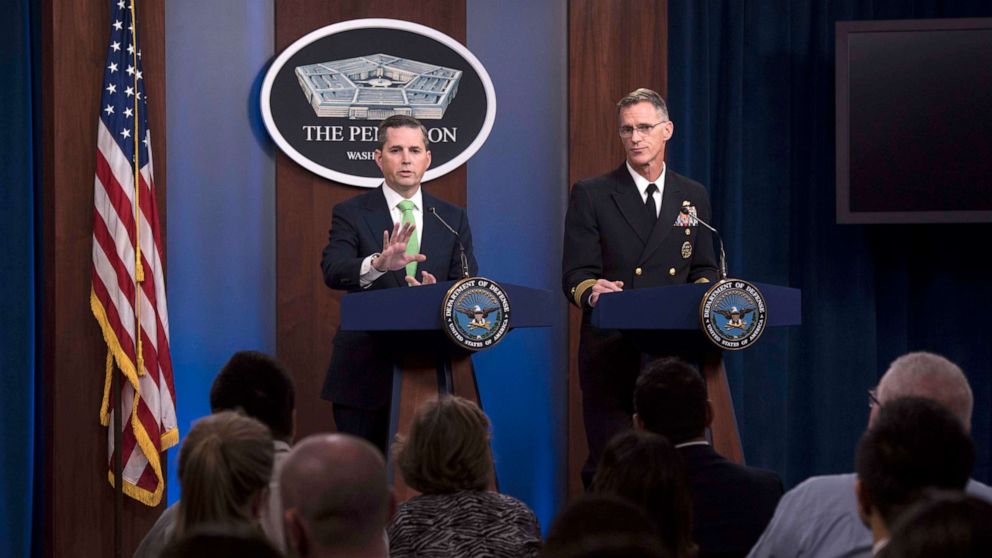 ABCNews
By ELIZABETH MCLAUGHLIN
As the Pentagon works to maintain its competitive advantage over Russia and China, partisan gridlock on Capitol Hill could jeopardize its modernization efforts.

When Congress returns to work after Veterans' Day, they will only have 10 days to pass a spending bill before the U.S. military and the rest of the federal government runs out of funding.

To avert a shutdown, President Donald Trump's director of legislative affairs signaled that the White House is inclined to support another stopgap spending bill, called a continuing resolution, or CR.

But the Pentagon is sounding the alarm for how dangerous that temporary spending bill would be for military readiness.

Continuing resolutions provide funding to the government at the previous year's budgeted level. But that's problematic for the Pentagon, which plans its next-year purchases and training based on the higher level of funding it expects to receive in the coming fiscal year.

Without the passage of a new spending bill, the delivery of the Navy's new nuclear-powered submarine will be delayed; the Air Force won't be able to procure 1,000 GPS-guided bombs; and dozens of military construction projects including new homes for service members will be halted.

"A CR top-to-bottom is debilitating," chief Pentagon spokesperson Jonathan Hoffman said on Thursday, adding, "We lose buying power. We lose predictability with our contracting. We lose our ability to train exercises."

Republicans and Democrats have been at odds over appropriating funds for the U.S.-Mexico border wall, among other issues.The current stopgap bill, passed in September, only funded the government through Nov. 21. While the effects of that three-month CR are already being felt across the Defense Department, the services are warning that operating for any longer period of time without stable funding will have severe consequences.

In the Navy, an extended CR risks the delay of the aircraft carrier USS John C. Stennis returning to the fleet following refueling and upgrades. Additionally, training that sailors perform while at sea would be canceled, and ship maintenance periods would be deferred, Navy spokesperson Lt. Timothy Pietrack told ABC News.

For the Army, the production of new UH-60 Black Hawk helicopters and upgrades to the Stryker fighting vehicle would be delayed. The service also wouldn't be able to procure and develop Land-Based Hypersonic Missiles.

"A day-to-day slip for a budget deal risks putting our service in a situation where we cannot recover from the effects of a continuing resolution," Army Secretary Ryan McCarthy said in a statement to ABC News. "Each day that passes has the potential to severely impact and plague readiness at the individual and collective training level."

McCarthy said a long-term CR could jeopardize the Army's ability to maintain a competitive advantage over America's near-peer competitors like China and Russia. But it also affects soldiers who are stateside.

"Without an approved budget, we are unable to build 4,400 new homes and will be forced to delay the repair of another 269 homes," McCarthy said.

For the Air Force, a stopgap bill will delay development and production of the latest version of the F-15 fighter jet, meaning the service will have to "operate and sustain an aging F-15C fleet longer than planned, incurring added extensive maintenance actions," according to the Pentagon.The service also wouldn't be able to procure upgrades for its F-22 and F-35 aircraft.

"As the Marine Corps invests in new warfighting capabilities to implement the National Defense Strategy (NDS), continued budget uncertainty negatively impacts our ability to modernize," the Marine Corps said in a statement to ABC News, adding, "A sustained, predictable and increased budget is necessary to properly execute the NDS."