KGO
PACIFICA, Calif. (KGO) -- Three hikers are safe after being rescued off a cliff in Pacifica where they were stranded for about 11 hours.

Authorities say, it began when a 23-year-old man and two 13-year-old female relatives set out for an evening beach hike on Friday.

"They went out for a late hike and the tide came in so they went to higher ground and ended up getting stranded on the cliff," said parent Todd Schecter.

Attempts to rescue the group Friday night were hindered by darkness and strong winds.

Two 13-year-old girls and a 23-year-old man were rescued Saturday morning after getting stuck on the side of a steep cliff south of Pacifica in San Mateo County.

At about 10 a.m. Saturday, winds died down and a dramatic rescue unfolded. The CHP chopper used a basket to pluck each hiker from the cliff delivering them safely to the beach below.

RELATED: Rescuers say man held on to rocks for 90 mins after plunging off Montara cliff

Parents of the teenage girls were grateful for the rescue effort.

"Throughout the night they kept us informed we are grateful to first responders, the kids are doing great," said parent April Sanchez. 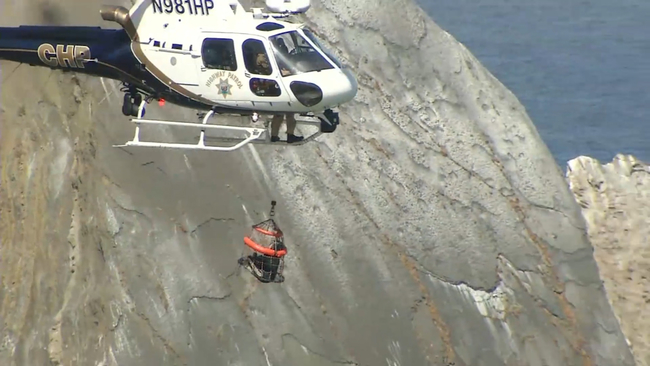