The first fire sparked after 4 p.m. near Capitol Expressway and Tuers Road. Fire Captain Mitch Matlow told ABC7 News the department is considering the fires suspicious in nature because at least four fire ignited within minutes and miles of one another.

"We still don't know whether or not it was deliberately set," Captain Matlow said in a Wednesday afternoon press conference.

The subsequent fires put San Jose Police and arson investigators on the case.

"We don't want people setting fires accidentally or deliberately," Matlow said. "Obviously, it creates a hazard for the people living in the creek. Those people -- I mean, that's their home."

Matlow was referring to the number of nearby homeless encampments that are located along Coyote Creek.

When asked whether it's possible the fires started at one of the camps, Captain Matlow said it was too early to determine who or what caused the fires.

He said he's certain encampments were impacted by the fires.

Matlow said no one was injured and no structures were damaged in the suspicious fires. Though the blazes threatened neighboring mobile homes.

ABC7 connected with a neighbor, Sy Le, after the fire tore through his wooden fence, burning just feet from his San Jose home.

His wife was the only person home at the time. Fortunately, she wasn't injured.

Coyote Creek neighbors, including Le, said they're worried it could happen again.

"Very crazy, because this is the first time I saw a fire leaning into my house," Le added. "I have been here for five years and I don't know what happened."

Captain Matlow said the department hasn't mapped out the area, so it's unclear exactly how much of it burned.

For more stories, photos, and video on recent fires in the Bay Area and across the country, visit this page.

Take a look at just how close the #TuersFire came to a nearby mobile home park. Unclear just how much vegetation burned along Coyote Creek, as @SJFD hasn’t mapped out the area yet. #abc7now pic.twitter.com/EF3sAwMsDU

Crews mopping up hot spots after four suspicious fires burned within minutes of each other, along Coyote Creek in San Jose. #TuersFire #ABC7now pic.twitter.com/mPfmbjfYo5

.@SJFD says no structures were damaged, but the #TuersFire burned close to Sy Le’s home. Le’s wife was home during the fire. She’s ok. #abc7now pic.twitter.com/v7cVN082qN 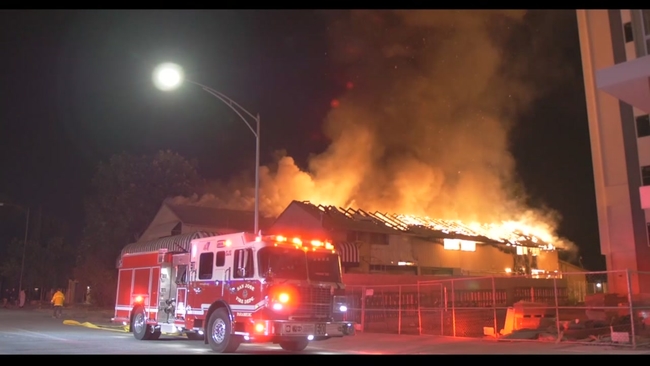