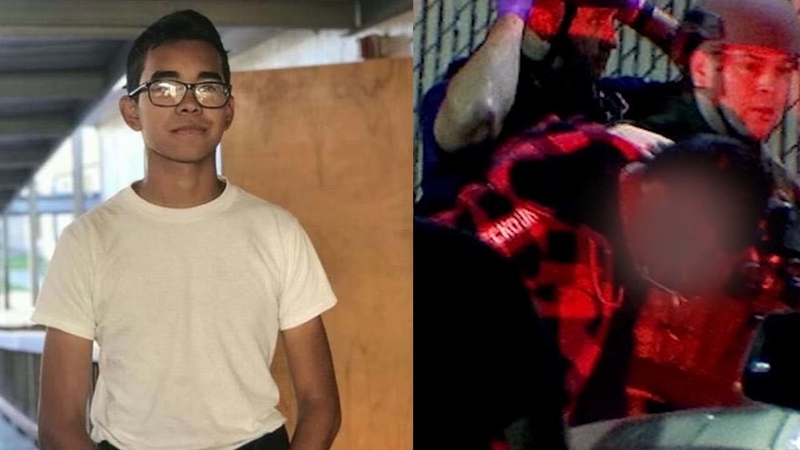 HOUSTON, Texas -- A Texas high school student has been charged with manslaughter, less than 24 hours after authorities say he shot another student to death, according to police.

The suspect, who's believed to be 16 years old, was questioned for several hours overnight but refused to make any statements about what happened, authorities said.

Multiple friends of the victim at Bellaire High School told ABC13 in Houston that the victim's name is Cesar Cortes. He had planned to serve his country and had already enlisted in the Army.

The suspect was arrested around 8 p.m. on Tuesday. The weapon used had not been located as of Wednesday morning, according to Bellaire police. Investigators said the suspect may have discarded it after leaving the high school campus.

"Citizens in the area of (Bellaire High) school should be careful and report any found handgun immediately to Bellaire PD," police chief Byron Holloway said.

In pictures taken during the arrest, the suspect is seen being escorted into a police vehicle in handcuffs. Police say the student was hiding with a friend behind a convenience store before his arrest. The friend was also taken into custody.

Police say the suspected shooter and a friend were hiding behind a convenience store before the arrests.

HISD released the following statement:
"The Houston Independent School District is deeply saddened to learn of the tragic death of one of our students. We offer our deepest sympathies to the student's family and friends. This incident is being investigated by the Bellaire Police Department. HISD is fully cooperating in the investigation. In this time of sadness and loss, I want to assure you that we will have grief and crisis counselors available on campus tomorrow and as long as needed to offer our students and staff emotional support. We will also have extra officers on campus and patrols around the campus in addition to extra administrative personnel to ensure the school is safe and secure."

Meanwhile, a community prayer gathering organized by Crosspoint Church has been scheduled for Wednesday at 7:30 p.m. at Evelyn's Park Conservancy, located at 4400 Bellaire Blvd.
"A learning environment is the last place where young people should feel unsafe and in fear of their lives," said Mayor Sylvester Turner in a statement. "Yet gun violence continues to disrupt schools and destroy families across the country. I extend my deepest condolences to the young man's loved ones and to all students, teachers and staff at Bellaire High school."

Turner said he spoke with students who serve on the Mayor's Youth Council during a meeting about the incident, saying "As I said to them, I will continue to work with elected officials at the state and federal level, along with advocacy groups and all people who are ready to enact laws to protect our children."

"It is profoundly sad that a student who had a whole life ahead was shot to death today at Bellaire High School. There can be no excuses or acceptable explanation for a killing such as this. When we learn more about the incident, we will determine if more security or other violence prevention efforts are necessary at our schools. HFT stands ready to help the Bellaire school community in any way possible during this tragic time."
Report a correction or typo
Related topics:
deadly shootinghigh schoolgun safetyteen shotshootingteenagerstudent diesteenagersstudent safetyu.s. & worldstudentsguns
Copyright © 2022 KTRK-TV. All Rights Reserved.
TOP STORIES
Website for free COVID tests is here. How does it work?
Victim of deadly NYC subway attack remembered in SF
Criminals smash 6 SJ storefronts in 90-min spree, police say
Some Bay Area residents encounter problems ordering COVID tests
Airlines worldwide rush to change flights over US 5G problems
Some issues arise on 1st day of USPS free COVID tests
COVID-19 updates: Data shows fewer COVID cases in Bay Area
Show More
2 dead after San Jose collision involving 3 pedestrians: SJPD
Experts warn don't 'let guard down' as COVID cases decline
400M N95 masks available to the public for free starting next week
Man arraigned for 2 group burglaries at high-end shoe store
Fashion icon André Leon Talley dies at 73
More TOP STORIES News