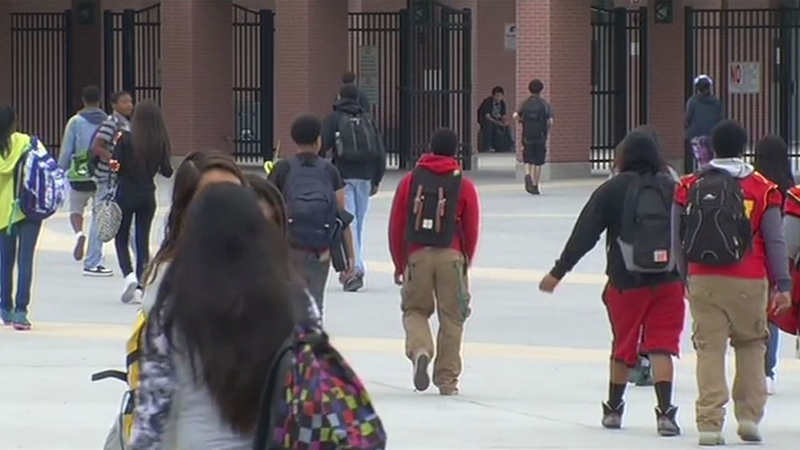 RICHMOND, Calif. (KGO) -- A high school in Richmond is deciding how to punish a student accused of selling marijuana-laced cookies to her fellow students.

It all started when a student passed out in biology class. While school officials were getting her loaded up on a gurney to go to the hospital, a boy then came forward experiencing the same symptoms. He was sweating and was getting groggy. Both of those kids were taken to the hospital while other students told educators about the cookies. The school board president thinks the seller of the cookies should be severely punished.

"With the individual who brought the marijuana cookies on campus, we want to send a message that they have to make better choices. Judgment is important, and that as a young person have to start making better judgment. And this was just a bad decision, a bad mistake, and there's going to be consequences for the behavior," said West Contra Costa Unified School District President Charles Ramsey.

Five students got sick from the cookies, two went to the hospital. The principal is considering whether to expel the senior. He says he can't believe this is how she would want to go out and be remembered.

ABC7 News spoke to a father who is very upset and said it was very scary after his daughter was treated by the doctor. He was told to wake her up every two to three hours to check on her. He said she was out of it and wants to know how this happened on school campus.

"Came to school and you have to take your daughter to the hospital because she's really sick," Henry Reyna said. "I'm really mad, but I pray lord and say give me peace in my heart."

He says when he saw 15-year-old Meily she was like a zombie. "My daughter say, you know, 'daddy as soon as I ate the cookie I feel like I'm gonna die.' She said, 'I feel like a giant and went to the bathroom and the little tiles moving like this' and I said 'wow that's really scary,"' Reyna said.

"My heart felt like it was going to come out and like I was paranoid and like I didn't know what was happening to me, so it was pretty scary," Meily said.

Meily says she did not know there was marijuana in the cookies. She was not the only one who ate them.

"It was really crazy, like I seen some girls passing out in the hallway," one student said.

The 17-year-old girl accused of selling the cookies is in juvenile hall and faces several serious charges.

Reyna would like to know how she sold cookies with marijuana in them on a school campus. "On Monday, I have to go to the school. I'm gonna speak to the principal, they have to explain what happened," Reyna said.

Reyna said the doctor at the hospital told him that he had treated 15 students and police say it is likely that there are more victims and ask that they please come forward and talk to investigators.