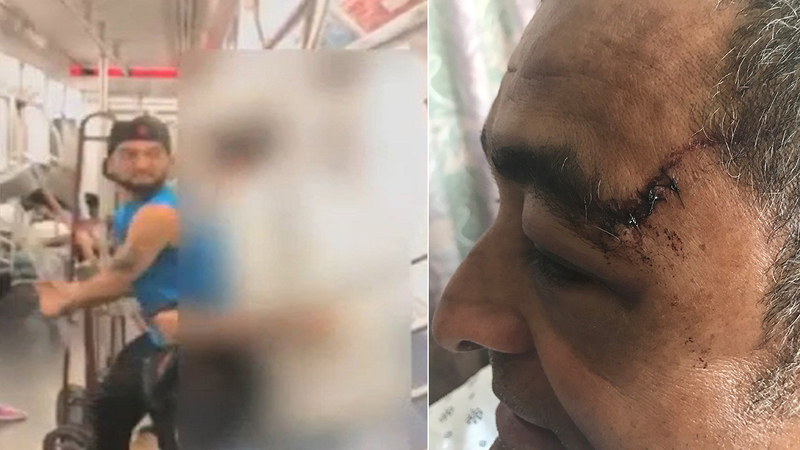 LOWER MANHATTAN, Manhattan -- Police have arrested a suspect after a man was struck in the face with a metal tool while riding the subway in Lower Manhattan.

Geovannie Nieves, 35, is charged with felony assault with a weapon.

Police say the victim, 59-year-old Michael Vansluytman from the Bronx, got into a verbal dispute with Nieves aboard a southbound 2 train near the West Broadway and Chambers Street station just before 11:30 p.m. Saturday.

Michael Vansluytman describes the moment he was attacked on the subway by a man wielding a metal tool.

Nieves then allegedly struck Vansluytman in the face with a metal tool and fled on foot when the train stopped at Chambers Street.

"By the time I get up to put my hand to at least to stop the lash, he got my hand," Vansluytman continued. "So I drop down back on the seat and noticed the blood."

He was transported to the hospital in serious, but stable condition. He suffered a fractured skull and broken eye socket.

Vansluytman will celebrate his 60th birthday this coming Saturday.

He said he was in New Jersey last Saturday inviting his family and friends to come to his party.

His cousin had dropped him off at Newark Penn station, and he was on his way home when the attack happened.

He says he still plans to attend his birthday party this weekend.