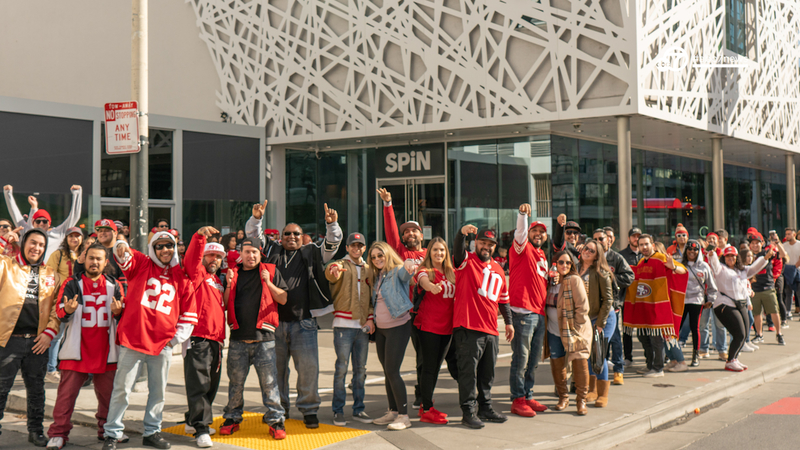 SAN JOSE, Calif. (KGO) -- With the Super Bowl only days away, the celebrating quickly turns to planning as the San Francisco 49ers Faithful start to figure out where they will watch the game.

Good news @49ers Faithful! There is still plenty of #NFCChampionship gear available at the 49ers Team Store. Fans were still packing in to get their piece of history, but the team told me they will continue to get shipments of gear in ahead of the big game! #49ers #SuperBowlLIV pic.twitter.com/ZqcimhDRRd

"We're going to be home," Steve Villegas said. "I've got three big screens at the house. We're going to load it up, get deli trays and invite the family over to watch the game."

"We'll be across the street at my neighbor's house," Marcus Milazzo said. "He has a man cave in his garage set up really well. There's multiple TVs and he's a big Niners fan."

"We'll be at home at Hayward," Bonnie Tullett said. "That's where we've always watched it. We can't afford the tickets. The next best place is at home."

If you don't plan on spending the record ticket prices but still want to be surrounded by Niners fans, you can check out one of two team-sponsored watch parties, including here at SP2 in San Jose.

RELATED: Here's what a trip to watch the 49ers play in Miami would cost

"We had people showing up two to three hours in advance, even before we were opening the doors for the last game," SP2 General Manager April Seo said. "That was probably the biggest turnout we had. People were waiting in line for hours. For the Super Bowl, I'm assuming around 700 people are going to show up."

The team has hosted official watch parties at the same two locations all season long and that is true for the Faithful, who want to cheer on the 49ers in Super Bowl 54.

Spin SF in San Francisco and SP2 Communal Bar and Restaurant near San Pedro Square have been the spot to get the most game-like experience, even if you're not at the game.

"We had raffles and free bobble heads going out," Seo said. "We're definitely going to have that same awesome vibe. We'll have a DJ, drinks flowing and we'll make sure everyone has a good time."

The bar wasn't sure exactly what to expect when they began hosting watch parties to start the year.

But during football season, this place transforms into a football fan destination that has changed the landscape of their business.

"Last Sunday we probably had, at least, 10 times the revenue that we usually would've made," Seo said. "It's a huge influx for business. Everyone loves this place on the late night so it's awesome to see it filled up on a Sunday and filled up with a bunch of 49ers fans."

It's suggested to show up to both locations plenty early and check with each business on their specific reservation practices.

Final preparations are underway and details on timing will be available in the coming days.