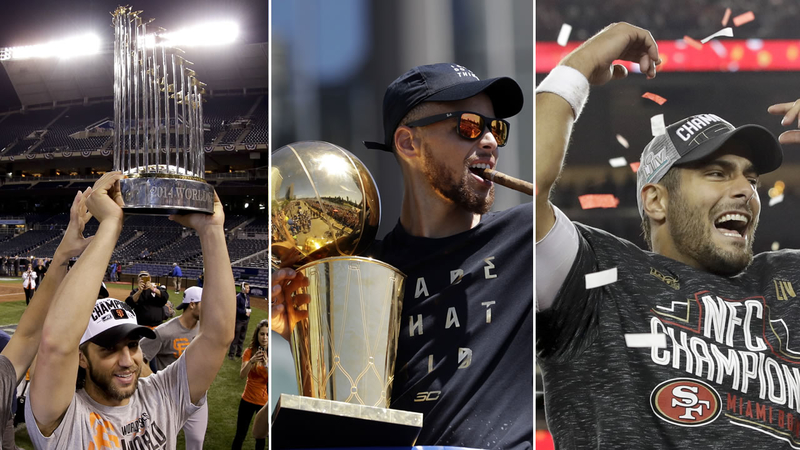 SAN FRANCISCO (KGO) -- Eleven championship games in 10 years. From the even-year magic Giants to the Dubs Dynasty and beyond, the San Francisco 49ers are keeping the Bay Area's stretch of sports dominance alive.

Here's a look back at the Bay Area's recent championship runs.

The upstart Giants had never won a World Series since moving to San Francisco. In the post-Barry Bonds era, the pitching ruled the day. Tim Lincecum, Matt Cain, and 21-year-old rookie Madison Bumgarner all won games.

The even year magic returned as the Giants returned to the Fall Classic to take on the Detroit Tigers. Detroit's ace Justin Verlander had an unbelievable season, but in Game 1, the Giants set the tone jumping out to a 6-0 lead powered by Pablo Sandoval. "The Panda" clubbed three home runs that day and the Tigers really never recovered.

THE HAR-BOWL pitted Jim Harbaugh's 49ers against John Harbaugh's Ravens. Baltimore jumped out to a 28-6 lead and then the power went out. When the lights came on, so did the 49ers offense - scoring 17 unanswered points. But a stalled late drive cost the 49ers the victory. This was the year Colin Kaepernick emerged as a star, and the 49ers had a dominating defense featuring NaVorro Bowman and Patrick Willis.

The official beginning of the Dubs Dynasty. The Warriors took down LeBron James and won their first title in 40 years. Stephen Curry had 26 points per game, but Andre Iguodala's defensive efforts to slow down James cemented the MVP honors. The absence of Kevin Love for the series and Kyrie Irving for 5 of the 6 games left Cavaliers fans with some hope for the rematch.

The Warriors won an NBA record 73 games, but also wore themselves out in the process. In the end, the Cleveland Cavaliers outlasted the Dubs in 7 games. Draymond Green was suspended for what could have been a championship-clinching Game 5 after getting into it with LeBron James near the end of Game 4. In Game 7, Kyrie Irving hit a clutch 3 that would give Warriors fans nightmares throughout the offseason.

After a run of playoff appearances that fell short, the San Jose Sharks finally made it to the Stanley Cup Final. Could this be the year they finally get over the hump? Unfortunately, no. In a run that should have garnered a ton of attention, the Sharks were stuck in the shadow of the Warriors success at the exact same time. The Bay Area enjoyed the NBA Finals and Stanley Cup Final on alternating days, but the Penguins took the series.

The Warriors' NBA Finals loss in 2016 allowed Kevin Durant to feel like he wasn't completely jumping on the bandwagon. KD's addition made the Warriors an unstoppable force. They won 15-straight playoff games before losing in Game 4. They finished the series in 5.

2018 - NBA Finals
Result: Warriors 4, Cavaliers 0
MVP: Kevin Durant
The Warriors swept the Cleveland Cavaliers in their fourth-straight NBA Finals meeting. This became the first NBA Finals where the same two teams met four times in-a-row. The Warriors won Game 1 in overtime despite 51 points from LeBron James, who ended up injuring his hand punching a white board in frustration. James played through it, but that was pretty much the end of the Cavaliers chances.

FINALLY A NEW OPPONENT. The Warriors finished off the Houston Rockets without Kevin Durant, and swept the Portland Trail Blazers to get to their fifth-straight NBA Finals. The Warriors hoped for a KD return to help them win another title. He returned in Game 5 with the Dubs trailing the series 3-1. It started out great for KD, then he ruptured his Achilles tendon. The Warriors hung on to force a Game 6, but when Klay Thompson tore his ACL, the series was effectively over.

The San Francisco 49ers take on the Kansas City Chiefs in Super Bowl LIV in Miami, Florida. The 49ers finished the season 13-3 and trounced the Minnesota Vikings and Green Bay Packers to win the NFC Championship. The Kansas City Cheifs finished with a record of 12-4. They came back from big deficits in both playoff games, beating the Houston Texans and Tennessee Titans to win the AFC Championship.